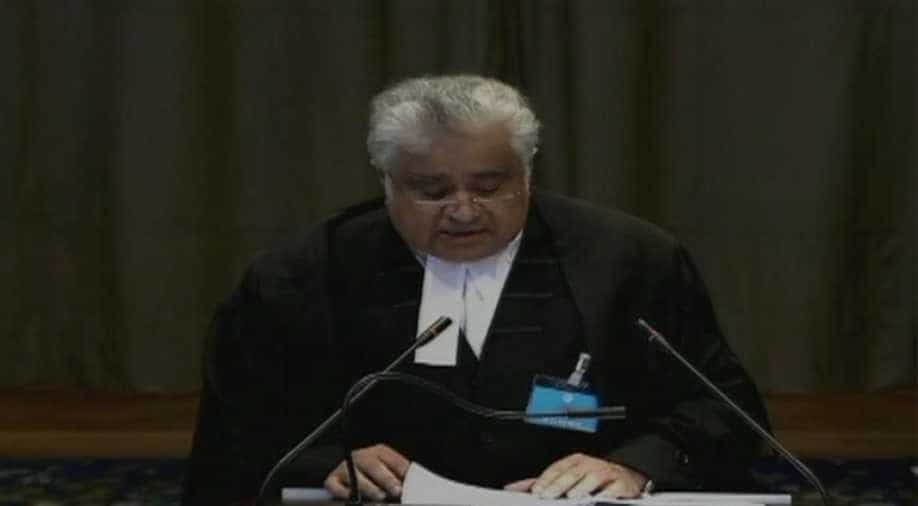 Harish Salve, who was representing India in the case, also said that the time has come for the ICJ to make Article 36 a potent weapon for protecting human rights.

India on Wednesday questioned the functioning of Pakistan's notorious military courts and urged the International Court of Justice (ICJ) to annul Kulbhushan Jadhav's death sentence, which is based on an "extracted confession".

Jadhav, 48, a retired Indian Navy officer, was sentenced to death by a Pakistani military court on charges of "espionage and terrorism" after a closed trial in April 2017. His sentencing evoked a sharp reaction in India.

"Annul the decision of the military court and restrain Pakistan from giving effect to the (death) sentence. Release Jadhav and ensure safe release forthwith. If not then direct a trial under normal law with full consular access," said Deepak Mittal, Joint Secretary, the Ministry of External Affairs, making the final submission in the court on the third day of the hearing.

Harish Salve, who was representing India in the case, also said that the time has come for the ICJ to make Article 36 a potent weapon for protecting human rights. "Jadhav has become a pawn in Pakistan's tool to divert international scrutiny from itself," Salve said in his arguments during which he mentioned the "dastardly" terror attack in Pulwama and another in Iran last week by Pakistan-based terror groups targeting security forces in both countries.

"There was a time when the world respected Pakistan, today the world doesn't have the same respect for Pakistan in its own incarnation," Salve said, taking a dig at Pakistan's counsel Khawar Qureshi, who on Tuesday said 'he has great respect for India but not its present incarnation.'

Salve said that Jadhav has been sent to gallows on the basis of "extracted confession". "Jadhav's trial was completed in 4-6 months or weeks...What happened to the 150 people killed in the Mumbai terror attacks?" Salve asked as he raked up the Ajmal Kasab case to highlight the meaning of judicial review.

"In Kasab case, the LeT terrorist who was apprehended and caught red-handed by brave police officers, the Supreme Court of India examined materials on record first-hand since it was the case of a death sentence. This is called review," he said. He also objected to the abusive language used by Pakistan's counsel in the case, urging the UN court to draw a red line.

Counsel Qureshi's transcript is "peppered with words such as shameless, nonsensical, laughable, breathtaking and arrogance. India takes exception to be addressed in this fashion. I would let the matter rest as Indian culture prevents me from indulging in a similar language of insults," he said.

India moved the ICJ in May 2017 for the "egregious violation" of the provisions of the Vienna Convention by Pakistan by repeatedly denying New Delhi consular access to Jadhav.

The four-day hearing in the Jadhav case opened Monday at the ICJ headquarters in The Hague amidst heightened tensions between India and Pakistan following one of the worst terror attacks in Jammu and Kashmir by Pakistan-based Jaish-e-Mohammad terror group that killed 40 CRPF soldiers. On Thursday, Pakistan will submit its final arguments. The ICJ is expected to deliver its verdict in the summer of 2019.