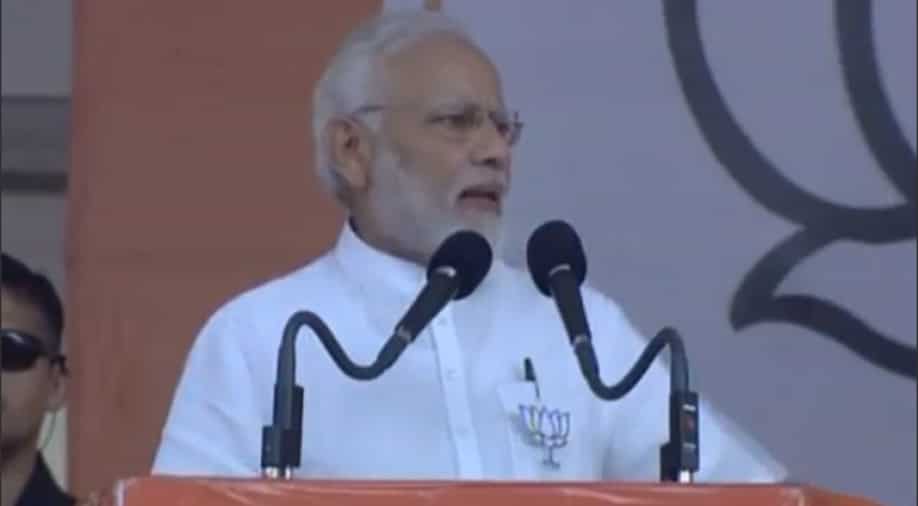 Prime Minister Narendra Modi is undertaking his third round of campaigning in poll-bound Karnataka on Thursday.

The BJP has also lined up a galaxy of leaders, including Union home minister Rajnath Singh, to address public meetings in the next few days, BJP sources said.

On the second day of Karnataka poll campaign, PM Modi is on visit of Ballari and Bengaluru. India's prime minister stepped into the poll campaign on May 1 in a heated last leg burst addressing rallies in Mysuru, Udupi and Belagavi. PM Modi had addressed the farmers in Karnataka through the Namo App on Wednesday which was live-streamed across the poll-bound state.

Prime Minister Narendra Modi said, "Look at the rising illegal mining in the state. The Congress government here couldn't even frame a strong mining policy. Karnataka has a 'Sidda-Rupaiah Sarkar'. It has created a debt-burden for the state."

16:06 PM: Congress government in Karnataka is in 'sleep mode.' They did not spend the funds Centre allocated for development of the state, said PM.

16:00 PM: We wanted OBC Commission to get constitutional status but the Congress did not let it happen, the Prime Minister added.

16:00 PM: Congress indulges in vote-bank politics. They divide people on the grounds of caste. They are insensitive towards the tribal communities and the OBCs said PM.

When we had got the opportunity to serve people of Karnataka earlier, so many development initiatives were undertaken. But sadly, Congress couldn't even ensure proper water supply despite the state being rich in water resources: PM Narendra Modi in Ballari #KarnatakaElections2018 pic.twitter.com/CzFlF6nfc8

Look at the rising illegal mining in state. Congress govt here couldn't even frame a strong mining policy. Karnataka has a 'Sidda-Rupaiah Sarkar'. It has created a debt-burden for the state: PM Modi in Ballari #KarnatakaElections2018 pic.twitter.com/bGi0paXYrx

Congress has ruined the rich history & legacy of Ballari. By defaming Ballari, they have disrespected the people of this district. Your enthusiasm & zeal shows that the Congress is going to lose Karnataka: PM Narendra Modi in Ballari #KarnatakaElections2018 pic.twitter.com/crhyK3KvlY

15:16 PM: Prime Minister Narendra Modi said that Congress leader Sonia Gandhi had promised Rs 3,000 crore packages for development of Ballari when she fought from here but once the Congress came to power, she forgot about it.

15:10 PM: Congress has ruined the rich history and legacy of Ballari. By defaming Ballari, they have disrespected the people of this district, he said.

15:06 PM: "Looking at the number of people who have arrived at this rally in Ballari I can already see that Congress is going to lose its last bastion soon," Modi said.