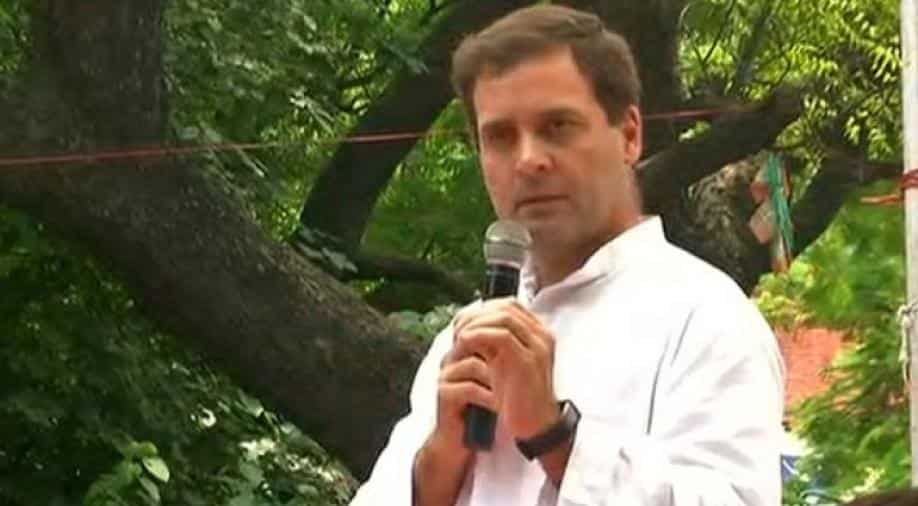 Upping his ante against Bharatiya Janata Party (BJP) with regards to the controversial Rafale fighter jets deal, Congress president Rahul Gandhi on Saturday said that even though Hindustan Aeronautics Limited (HAL)-made aircraft were used effectively by the Indian Air Force (IAF) to drop bombs during the 1999 Kargil War, the government did not find it competent enough to be part of the Rafale deal.

"During the Kargil War, HAL aircraft dropped bombs on the Pakistan Army. HAL knows how to make aircraft. The talks were confirmed. HAL discussed with France`s Dassault to buy one aircraft for Rs 526 crore. After that, `Chowkidar` became the Prime Minister. Soon after that, Prime Minister Modi visited France along with Anil Ambani. What happens next is that the Rs 526 crore aircraft now gets sold for Rs 1,600 crore. HAL is sidelined and Anil Ambani is made the offset partner. Anil Ambani never made an aircraft. HAL has been making aircraft for the last 70 years," Rahul said while addressing a rally in poll-bound Madhya Pradesh.

The IAF had used MiG-21, MiG-23, MiG-27, MiG-29, Jaguar and Mirage-2000 aircraft during the Kargil War. The aircraft were assembled by HAL under license production from the manufacturers.

Elaborating on the need for HAL to weigh in to manufacture aircraft, the Gandhi scion said: "The IAF came to UPA government and said that they want 126 fighter jets. The UPA government asked them to look around the world and buy the aircraft they find the best and buy them at the cheapest price. But we told them that the aircraft will be built in India as the youth want jobs and it will be made by HAL. Air Force people said that it`s totally correct."Rahul further said that the then Defence Minister Manohar Parrikar was unaware of all this. "He stood up and said, `I didn`t do this job. I don`t know what happened.` Prime Minister himself changed the contract. The French media asked them what has happened. How come Rs 526 crore became Rs 1,600 crore? Who is this Anil Ambani? How come he got this contract? Our press is a bit hesitant (in asking such questions)," he added.

The Congress chief then went on to say that people of Madhya Pradesh have "made up their minds" to dethrone Shivraj Singh Chouhan`s government. "And in few months 56-inch chowkidar`s government will also be removed. A woman told one of our workers that just like a tava gets bad in 10 years, similarly, Shivraj Singh Chouhan`s government has become like that tava. Now we have to pick up the tava and throw it out. Every Chief Minister in a BJP ruled state is involved in scams, where public money is stolen," he said.

Citing the controversy involving Chouhan`s son Kartikey, he asked: "Shivraj Singh Chouhan immediately filed a defamation case against me when I mistakenly used his son`s name in Panama Papers. But why didn`t he file a defamation case when I took his name in the Vyapam scam, the dumper scandal, and e-tendering?"

The assembly elections in Madhya Pradesh will be held for 230 seats on November 28, and the result will be declared on December 11.