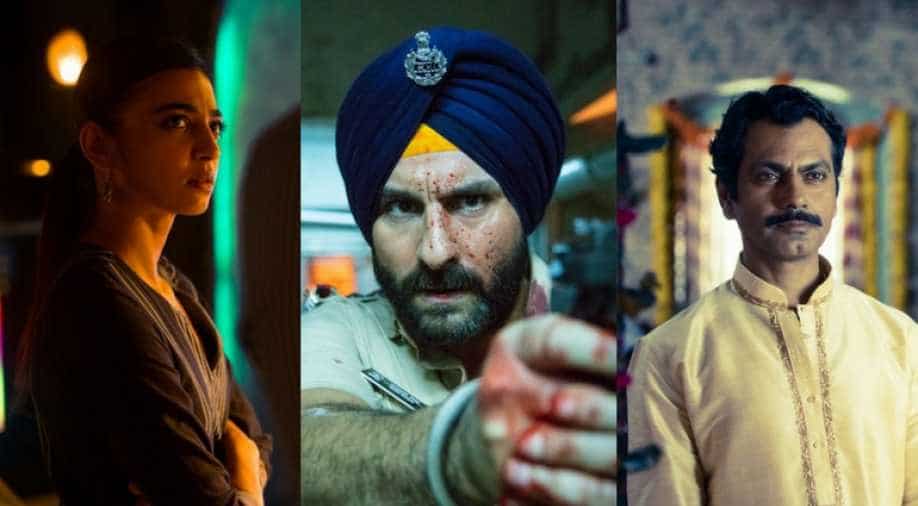 Saif Ali Khan is all set to make his foray into digital space. The National Award winning actor is making his debut in a Netflix original called Sacred Games. The first photos of the series were shared by Netflix on Twitter on Friday.

The deadliest games are the ones we've been fooled into playing. Here's the first look of #SacredGames pic.twitter.com/F1gBkaVGSf

Saif Ali Khan in a still from Sacred Games. (Twitter)

Radhika Apte in a still from Sacred Games. (Twitter)

Nawazuddin Siddiqui in a still from Sacred Games. (Twitter)

The series also co-stars Radhika Apte and Nawazuddin Siddiqui. The photo has a bloodied inspector Sartaj Singh point a gun at someone in what appears to be a dark dingy ally. An adaptation of the critically-acclaimed best-selling novel of the same name by author Vikram Chandra, Sacred Games is a series which focuses on Sartaj Singh (Saif), a seasoned and cynical Mumbai police officer, who gets an anonymous tip one fine day to capture the powerful Ganesh Gaitonde (Nawazuddin), criminal overlord of the G-Company. As the stakes mount and Sartaj seeks knowledge of his prey, it becomes clear that the game the two players thought they were engaged in is, in fact, part of a much larger scenario, one that expands beyond their city.

The series has been directed by Vikramaditya Motwane and Anurag Kashyap, the eight episodes long series will depict the underbelly of Mumbai. Incidentally, the web series will mark the debut of director Anurag Kashyap as well.