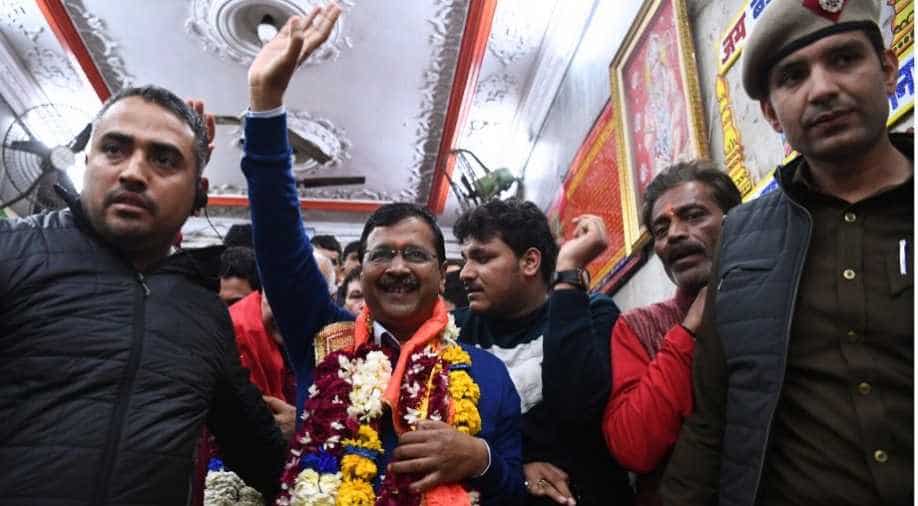 According to the final figures released by the Election Commission, the AAP won 62 out of the 70 seats with a total vote share of 53.57 per cent.

In a blow to Bharatiya Janata Party, Aam Aadmi party's Arvind Kejriwal secured a third term as Chief Minister in Delhi as he won a thumping majority in Assembly election. final figures released by the Election Commission, AAP won 62 of the 70 seats with a total vote share of 53.57 per cent.

The BJP won eight seats while the Congress stated at duck as it failed to win even a single seat.

Soon after results started coming in favour of AAP, Chief Minister Kejriwal addressed party workers at the Delhi headquarter. On Wednesday, Kejriwal will hold a meeting with the newly-elected party MLAs at his residence.

"Dilliwalon, ghazab kar diya aapne (Delhiites, you have done the impossible). I love you," Kejriwal said while accompanied by his wife, daughter and senior party leaders.

"It is the beginning of a new kind of politics today. This is a very auspicious message for the country and the politics of work can only take our country to the 21st century," he added.

"It is a victory for Bharat Mata (Mother India)," he said as a large number of supporters cheered him.

"The BJP indulged in politics of hate, but I thank the people of Patparganj...Delhi's people have chosen a government which works for them and explained the true meaning of nationalism through their mandate," he told reporters.

"Congratulations to AAP and Shri Arvind Kejriwal ji for the victory in the Delhi assembly elections. Wishing them the very best in fulfilling the aspirations of the people of Delhi," the prime minister said on Twitter.

While, West Bengal Chief Minister Mamata Banerjee said the Delhi polls have proven that only development will work, NCP leader Sharad Pawar stressed on the need to come together to keep the BJP out of power.

"The Delhi poll results indicate that 'winds of change' are blowing in the country. The results are not surprising to me," Pawar told reporters in Pune.

The elections in the national capital took place in the midst of massive protests in the city and elsewhere over the new citizenship law, an issue which was strongly raised by the BJP top leadership during the campaigning which often turned bitter and vitriolic.

Though BJP's campaign focused on national security issues, the AAP mainly focused on its achievements in the fields of education, healthcare and infrastructure.

The AAP had registered a sensational victory in 2015 by winning 67 seats in a hurricane march that almost wiped out the BJP and the Congress.
Carrying blue and white balloons, buntings and giant cut-outs of their leader Arvind Kejriwal, AAP workers celebrated at the party's headquarter in the national capital.

Meanwhile, Congress accepted defeat and vowed to rebuild and revive itself at the grassroots level in the city.

"People's mandate is against us, we accept it. We have resolved to revive and rebuild the party," Congress' chief spokesperson Randeep Surjewala said at a press conference.

A total of 672 candidates, including 593 men and 79 women, were in the fray for the hotly contested elections.