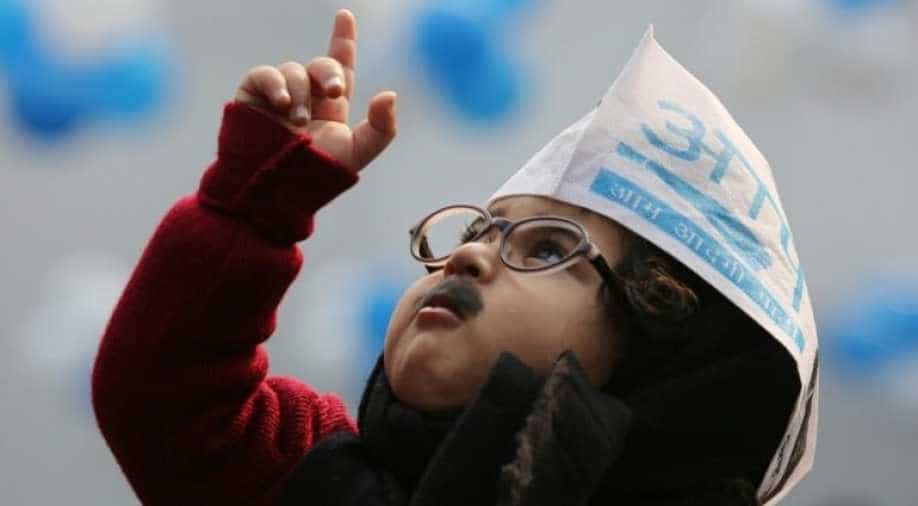 According to the Election Commission, the Aam Aadmi Party is leading in 58 seats with the BJP trailing far behind with 12 seats in the Delhi Vidhan Sabha Election 2020 even as the Congress is yet to open its account in the Delhi Assembly Election Result 2020

As Chief Minister Arvind Kejriwal's Aam Aadmi Party(AAP) surged to a decisive lead in the Delhi Vidhan Sabha Election 2020 the party tweeted a picture of a kid with the AAP cap with the caption "mufflerman" referring to the party chief.

According to the Election Commission, the Aam Aadmi Party is leading in  58 seats with the BJP trailing far behind with 12 seats.

In the latest trends, AAP's Madal Lal has been leading from Kasturba Nagar after the second round of counting in the Delhi Assembly Election Result 2020.

However, AAP's Deputy chief minister Manish Sisodia is trailing from the Patparganj seat in the Delhi Assembly polls against BJP's Ravinder Singh Negi by  1576 votes in the fifth round of voting. Delhi Assembly Speaker and Aam Aadmi Party's Ram Niwas Goel is also trailing from Shahdara.

With the Congress drawing a blank in the early trends, Delhi Congress chief, Subhash Chopra said: "I take responsibility for the party's performance, we will analyse the factors behind this."

"Reason for the drop in our vote percentage is politics of polarisation by both BJP and AAP," Chopra added.

AAP candidate from Model Town, Akhilesh Pati Tripathi, who is leading over BJP's Kapil Mishra said: "People want a govt that takes care of its citizens. People of Delhi have voted for development."

As the leads favouring AAP started coming in the morning, the ruling party's supporters took to Twitter to celebrate.

AAP worked on the formula of

In Europe they say that quality & free education, healthcare & basic amenities r their right as they pay taxes.