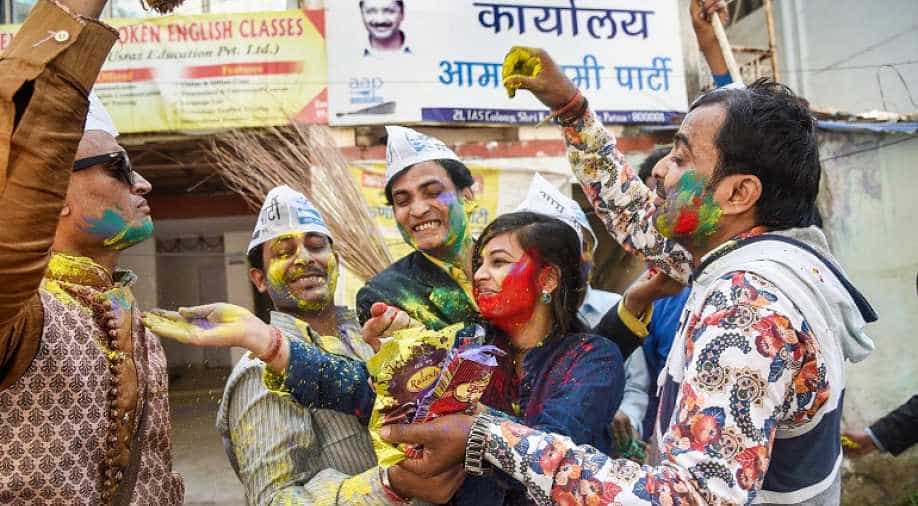 "Even post-Partition, when we have seen the worst kind of communal politics, Delhi has remained a very secular, cosmopolitan and liberal city. The trend has resonated even now", says @LGNajeebJung, Former LG, Delhi to @kartikeya_1975 pic.twitter.com/JLr8NZ9kYp

"Congratulations to AAP and Arvind Kejriwal for the victory in the Delhi Assembly elections. Wishing them the very best in fulfilling the aspirations of the people of Delhi," tweets PM Modi.

''This is the beginning of a new kind of politics. This is a new sign,'' said Kejriwal as he delivered the victory speech at the party headquarters amid celebrations.

Earlier Kejriwal, who secured second term as chief minister of Delhi, greeted the party workers at party headquarters in Delhi.

''I thank people of Delhi for reposing their faith in AAP for the third time. This the victory of the people who consider me as their son and voted for us,'' he said.

''This is the day of Lord Hanuman who has blessed the people of Delhi,'' he continued ''We pray that Hanuman keeps showing the right path to us so that we continue to serve people for the next five years'', he further said.

Continuing its steller show, AAP seems to be widening the gap with BJP with Arvind Kejriwal's party leading in 62 seats against BJP's 8. BJP was leading in 14 seats a couple of hours ago but seems to have lost its momentum. As per latest trends, the party is currently leading in just eight seats.

''The people of Delhi, who are from all parts of India, have defeated the polarising, divisive and dangerous agenda of the BJP I salute the people of Delhi who have set an example to other states that will hold their elections in 2021 and 2022,'' he tweeted.

AAP won, bluff and bluster lost. The people of Delhi, who are from all parts of India, have defeated the polarising, divisive and dangerous agenda of the BJP 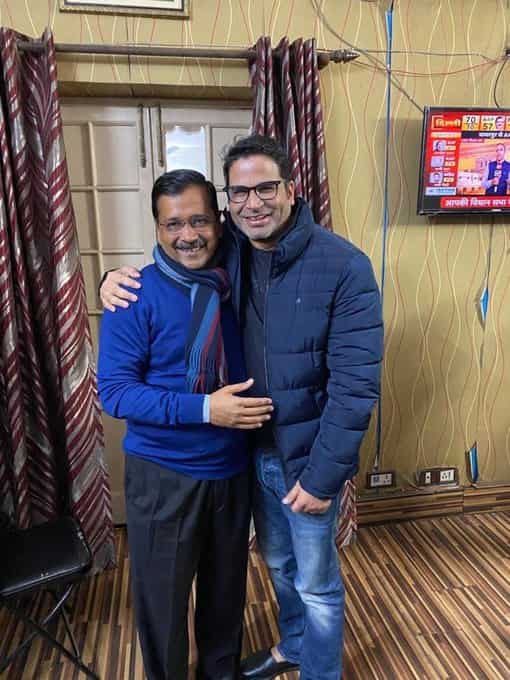 ''We accept Delhi election results and congratulate Arvind Kejriwal and the people of Delhi. We tried our best but, probably, we could not convince the people of the state. I hope Delhi develops under the chief ministership of Arvind Kejriwal,'' said Gautam Gambhir, BJP MP from East Delhi.

BJP MP from East Delhi, Gautam Gambhir: We accept #DelhiElectionResults and congratulate Arvind Kejriwal & the people of Delhi. We tried our best but, probably, we could not convince the people of the state. I hope Delhi develops under the chief ministership of Arvind Kejriwal. pic.twitter.com/GO4HG7s5fI

''Only development will work, CAA, NRC and NPR will be rejected''

West Bengal Chief Minister Mamata Banerjee on #DelhiElectionResults: I have congratulated Arvind Kejriwal. People have rejected BJP. Only development will work, CAA, NRC and NPR will be rejected pic.twitter.com/VgpX9TmoLs

The BJP is leading with a margin of 194 votes in Okhla assembly seat, home to Shaheen Bagh which has seen sit-in protests against the citizenship amendment act (CAA) for two months now. BJP`s Braham Singh with 7,107 votes was leading Aam Aadmi Party candidate Amanatullah Khan with 5,474 votes at 11:45 am.

If the latest trends are anything to go by AAP is surging ahead of BJP in Delhi Assembly polls and leading in 58 seats while BJP, which had scooped three seats in 2015, is leading in just 12 seats. The Congress party, which ruled Delhi for three consecutive terms until 2013, is yet to open its account.

AAP surged ahead of rivals as the Delhi poll results trickled in and the party was euphoric. The official Twitter handle of the party tweeted the photo of a 'Mufflerman'.

AAP was leading in 57 seats with BJP trailing far behind with 13 seats. Congress which did not win a single seat in the 2015 Delhi Assembly election is not leading in any seat so far.

Aam Aadmi Party candidate from Patparganj assembly seat Manish Sisodia is trailing by 1,427 votes from his nearest rival Ravinder Singh Negi. Manish Sisodia has got 13,844 votes, while Negi has got 15,271 votes, according to Election Commission website.

As per official Election Commission trends, Aam Aadmi Party was leading in 52 seats and Bharatiya Janata Party in 18 seats.

Meanwhile, television reports have suggested that APP is leading in 43 seats followed by BJP which leads in 19 seats.

Celebrations begin at Aam Aadmi Party office in Delhi after reports that party is leading in early trends. According to television reports, AAP is leading in 39 seats while BJP in 18.

Television reports quoting initial trends stated that APP was ahead in 20 seats while the BJP leading in eight. Congress just one seat.

''I am not nervous. I am confident that it will be a good day for BJP. We are coming to power in Delhi today. Don't be surprised if we win 55 seats,'' says Delhi BJP chief Manoj Tiwari as counting of votes begins.

Couting begins. Most of the exit polls predicted that Arvind Kejriwal-led AAP will retain the power, winning two-thirds seats while some have even predicted three-fourth majority in the 70-member assembly. The high octane campaign had seen the heavyweights of different parties leaving no stone unturned to influence the voters. Prime Minister Narendra Modi, Amit Shah and other Union ministers and CMs sought votes for the BJP, which has been out of power in Delhi for over 20 years now.

According to Delhi`s Chief Electoral Officer (CEO) Ranbir Singh, the counting of votes will take place at 21 centres. There will be a dedicated hall for every assembly constituency. A tight security net has been put in place to ensure the counting takes place in a peaceful manner. Over 670 candidates are in the fray for 70 seats at stake in the country`s capital.

62.59 per cent voter turnout was recorded in Delhi on February 8, when the elections were held in a single-phase.

The counting of votes for the Delhi Vidhan Sabha Election 2020 will begin at 8am today with the fate of Aam Adami Party(AAP) chief minister Arvind Kejriwal to be decided by voters of the national capital. The Delhi Assembly Election Result 2020 have been keenly followed nationwide as it is seen as a big test for BJP which has been out of power in Delhi for the past 22 years, the big question on everybody's mind is will the party which dominates the government also come back to rule the capital?

The counting of votes will take place in several locations spread across the city after the Election Commission officials open the EVMs at 8am on Tuesday amid heavy security. The BJP has campaigned to get back the capital with home minister Amit Shah leading the effort and was later joined by PM Modi to take on CM Arvind Kejriwal. Although the BJP hasn't announced its CM face but Delhi BJP chief Manoj Tiwari has been leading the electoral battle for the party.

The AAP which had won 67 of the 70 Delhi Vidhan Sabha seats marking a watershed in assembly polls in the capital, this time, however, the BJP hopes to give the ruling party a tough fight although several exit polls have given Kejriwal's party a clear majority. The Congress which failed to open its account in the polls in 2015 will also be hoping to improve its poll tally.