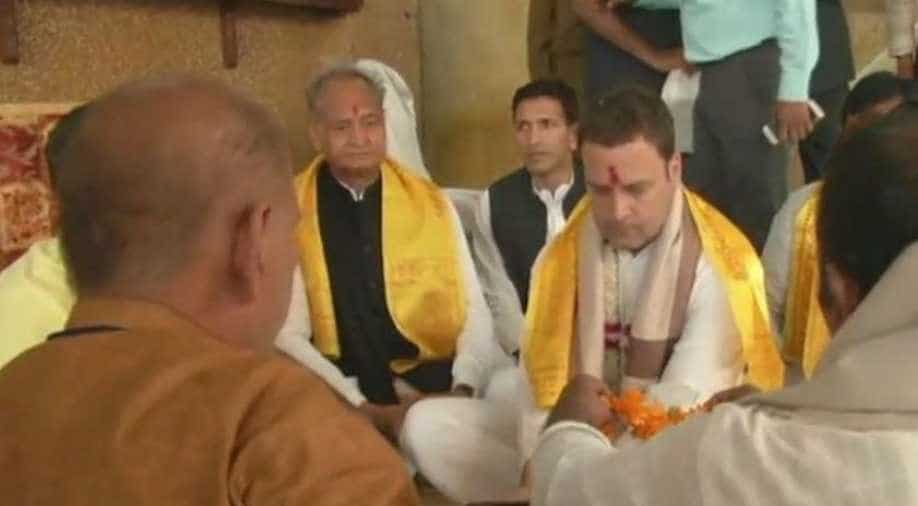 The Congress leaders would be seeking divine blessings at various temples in MP in a bid to wrest power from the BJP in the state where the Assembly polls are due later this year.

The Congress state election campaign committee chairman, Jyotiraditya Scindia, will kick off the party's campaign for the polls from Ujjain district after offering prayers at the famous Mahakal temple on May 11, state party spokesman Pankaj Chaturvedi said.

"Scindia is a deeply religious person, he is going to visit many temples to seek blessings of the Almighty to overthrow the BJP government, which has been in power for over 14 years in MP," he said.

The newly appointed MP Congress president, Kamal Nath, who formally took charge of the party in the state on May 1, visited the Gufa Mandir in Bhopal on May 2.

The same day, he also went to the Mahakal temple in Ujjain and offered prayers at the Pitambara Peeth in Datia district.

A Congress leader said their party chief Rahul Gandhi was likely to start his election campaign in MP after visiting either the Mahakal temple or the Pitambara Peeth.

Gandhi would visit some prominent Hindu temples in MP, replicating his Gujarat electioneering model, the leader said on condition of anonymity.

A BJP leader dubbed such tactics of the Congress leaders as "hypocrisy" to woo the voters, saying that the strategy won't work in the polls.

"The people know that the Congress leaders in MP have turned religious only to get votes. Their temple-going tactics to woo voters won't work in the forthcoming elections. They are anti-Hindu and believe in minority appeasement for votes," Sharma said.