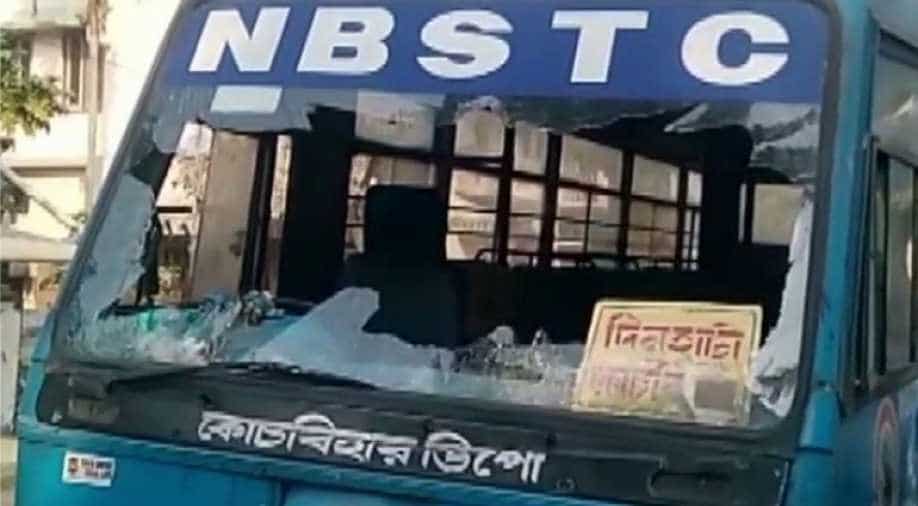 Sporadic incidents of violence in West Bengal and Kerala and rail blockades in certain states were witnessed Wednesday on the second day of Bharat Bandh, which also saw a partial disruption of banking and insurance services across the country.

Other sectors like mining, road transport, power supply too bore the brunt of the strike call given by country's 10 major central trade unions, except RSS affiliate Bharatiya Mazdoor Sangh, to protest against the government's alleged anti-labour policies and unilateral labour reforms. They had given a call for a two-day Bharat Bandh on January 8 and 9.

In Kerala, a treasury branch of the State Bank of India in Thiruvananthapuram was attacked and trains were blocked in various parts of the state on the second day of the strike.

At many places in Kerala, shops and commercial establishments remained shut, and buses and auto-rickshaws were also off roads in the state.

Trains were stopped by protesters at a few places in Tamil Nadu and banking services in some public sector banks interrupted in Telangana but life largely remained unaffected on Wednesday.

However, some impact of the strike was seen in Goa as private buses and tourist taxis remained off roads. Long queues of passengers were seen at various bus stands after the private buses association in the state shut operations.

In Mumbai, lakhs of commuters faced hardships as an indefinite strike called by BEST, the city's civic transport undertaking, continued. There were only five buses plying on city roads.

Over 32,000 BEST employees went on an indefinite strike Tuesday over various demands, including higher salaries.

Train services in Eastern Railway zone were disrupted Wednesday after supporters of the Bandh resorted to blockades at many places. A suspected bomb was found on the railway tracks at Ashoknagar in Sealdah-Bongaon section that led to the suspension of train services in the route.

In Odisha, train services were hit on the second day of the strike as trade union activists staged 'rail roko' at several places including Bhubaneswar, Balasore and Berhampur. Several trains were delayed due to blockade of railway tracks by strike supporters, leaving a large number of passengers stranded at many places.

Many states invoked essential services maintenance laws while the Centre had issued a stern warning to refrain from the stir Tuesday.

Banking services were also partially affected for the second day, as a section of PSU bank employees came in support of the strike call.

All India Bank Employees' Association (AIBEA) and Bank Employees' Federation of India (BEFI) have supported the strike, which has impacted banking operation where these two unions are strong.

However, the operation in SBI and private sector banks remained unaffected as other seven unions in the banking sector are not part of the strike.

Cheques worth about Rs 20,000 crore could not be cleared by clearinghouses all over the country on Tuesday, he claimed.

"We got a good response in industrial areas in Punjab, Haryana and Rajasthan as well. In our protest march from Mandi House to Parliament in the capital, around 4,000 workers came on the road to express their anguish...," he added.

He also said that there was a 100 per cent strike in 22 districts of Madhya Pradesh and 20 districts of Karnataka.

According to unions, the strike was affected due to UGC exams, which started from Tuesday as some state transport departments decided not to participate completely in the strike in the interest of students. The exams were scheduled in some states on Wednesday as well.

They have alleged that the government has failed to create jobs and grossly ignored unions' 12-point charter of demands.

They also said that Group of Ministers headed by Finance Minister Arun Jaitley on labour issues has not called unions for any discussion since September 2, 2015, strike which left them with no other option but to go on another strike.

Farming communities, through their associations, have also extended support to the strike. Student and teacher organisations of various universities have also declared support, the statement had said.