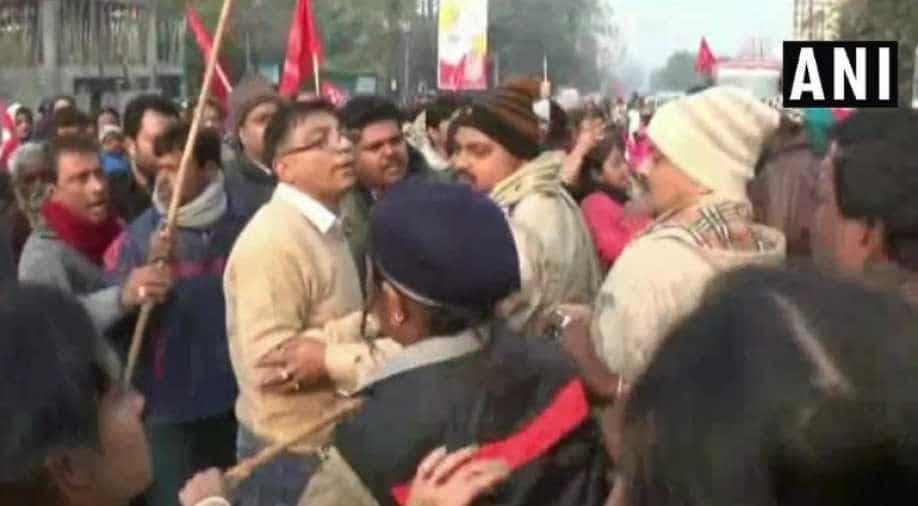 The bandh has been called by central trade unions protesting what they say are the 'anti-people' policies of the Centre.

Several protesters were arrested as sporadic incidents of vandalism were reported from parts of West Bengal on Tuesday during the two-day nationwide strike called by central trade unions protesting against the "anti-people" policies of the Centre.

Stones were pelted at a school bus in Champadali area of Barasat in North 24 Parganas district. The students were later deboarded from the bus, police said.

Strike supporters burnt effigies of Prime Minister Narendra Modi and burnt tyres in various parts of the state including Kolkata.

In Howrah, Siliguri, Bardhaman, Birbhum, North and South 24 Paraganas, clashes broke out between Trinamool Congress workers and strike supporters as TMC activists tried to stop them from forcibly imposing the strike.

Despite the incidents of violence, normal life in an around Kolkata and other parts of the state remained more or less unaffected by the strike call till 12 noon, except a few pockets.

Buses and other modes of transportation were seen on the roads although the number of passengers were much less than in other week days.

Tyres were burnt in Central Avenue of Kolkata to stop buses from plying in the roads. The protesters had a scuffle with the police when they tried to stop them from squatting on the roads.

A government bus was damaged by strike supporters at Champadali. Protesters also vandalised a bus at Jamuria in Paschim Bardhaman district.

Scuffles were witnessed between police and strike supporters in some areas of the state.

At Jadavpur area in south Kolkata, senior CPI(M) leader Sujan Chakraborty along with several other strike supporters were detained by the police.

Protesters squatted on tracks in some places to stop trains and burnt tyres on the roads.

Trains were stopped, buses and auto-rickshaws kept off roads as the 48-hour general strike called by 10 central trade unions against "anti-labour policies" of the central government, hit normal life in the southern state Tuesday.

Workers from various sectors have extended support to the two-day strike.

Venad Express, which runs from the state capital to Shoranur Junction daily, was delayed by more than one hour as agitators squatted on tracks, blocking its route, and raised slogans. Other trains that were stopped here were Jan Shatabdi and Raptisagar Express.

All trade unions except the Bharatiya Mazdoor Sangh have supported the strike, which has come five days after a 'hartal' was observed by right-wing groups in protest against the entry of two young women into the Sabarimala temple in Kerala.

The Sabarimala pilgrims, tourists, social and religious functions have been exempted from the strike Tuesday.

To ensure Sabarimala pilgrims were not affected by the strike, the Kerala State Road Transport Corporation has been operating buses from various destinations to Pamba, the foothills of the Sabarimala temple. However, KSRTC buses were not plying on other routes.

Meanwhile, pilgrims at Nilackal said they have been waiting for hours to reach the hill shrine. Private-run buses are also keeping off the roads.