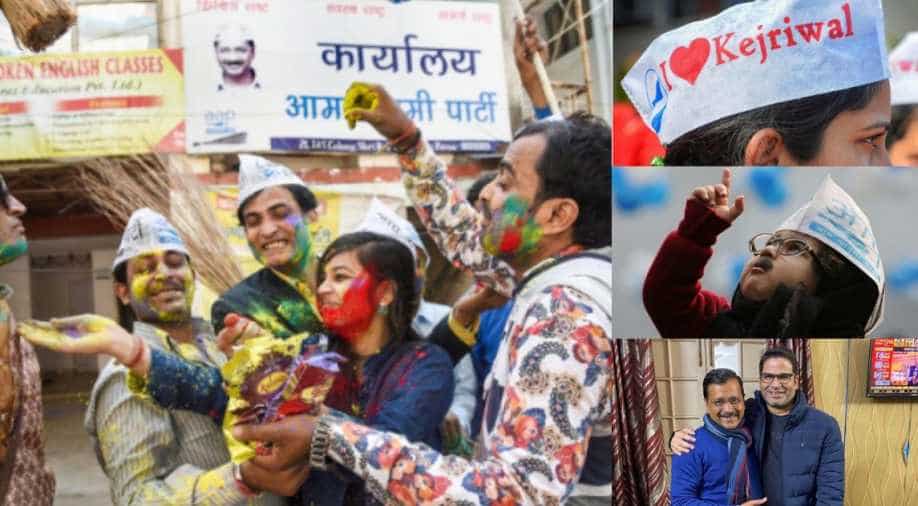 According to the Election Commission of India, AAP is leading in 63 assembly constituencies with the BJP far behind with 8 seats in the Delhi Vidhan Sabha election 2020

Chief minister Arvind Kejriwal's Aam Aadmi Party(AAP) surged ahead of its rival the BJP in the Delhi Vidhan Sabha election 2020 as leads suggested the ruling party is all set to sweep the Delhi Assembly election.

According to the Election Commission of India, AAP is leading in 63 assembly constituencies with the BJP far behind with 7 seats. Congress which hadn't declared its chief minister face is yet to open its account.

In Pics: From IRS officer to Delhi CM, the rise and rise of Arvind Kejriwal

With the Delhi Assembly election results stacked against the BJP, MP Parvesh Verma, said: "I accept the result. We will work hard and give a better performance in the next elections."

Congress candidate Alka Lamba was trailing from Chandni Chowk assembly seat. "I accept the result, but don't give up. Hindu-Muslim votes were completely polarised. Congress will now have to prepare for a new fight with new faces and a long struggle for the people of Delhi. If you fight today, you will also win tomorrow," Lamba tweeted.

In the latest trends, Aam Aadmi Party's Raghav Chadha was also leading from the Rajinder Nagar assembly constituency as the AAP wave continued to sweep India's national capital for the second time.

Congratulating the Aam Aadmi Party and Arvind Kejriwal, Kapil Mishra, BJP candidate from Model Town constituency, said: "BJP has lost the fifth state election in a row. It means we have somewhere failed to connect with the people of Delhi."

In the 2015 Delhi Assembly elections, the Congress had a vote share of 9.7 per cent against the BJP's 32.7 per cent and the AAP's 54.34 per cent. The Congress had been in power in Delhi for three straight terms between 1998-2013 with Dikshit as the chief minister.