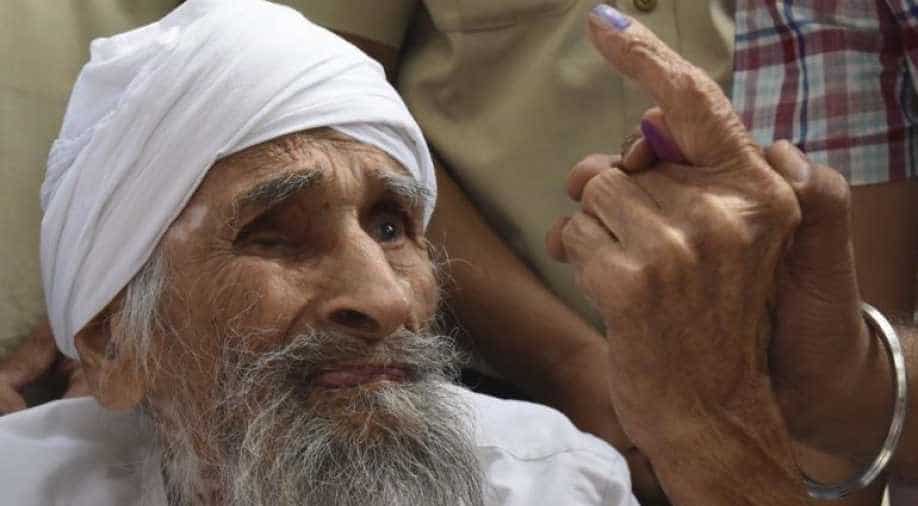 'I have cast my vote to the party which inclined towards development and work,' wheelchair-bound Singh told ANI at a booth in Sant Garh.

Oldest voter of the national capital, 111-year-old Bachan Singh, exercised his franchise on Sunday as all the seven seats in Delhi polled in the sixth round of national polls.

"I have cast my vote to the party which inclined towards development and work," wheelchair-bound Singh told ANI at a booth in Sant Garh.

Bachan Singh, a native of Lalpura in Punjab, lives as well as preaches the motto "even a single vote should be wasted".

On Saturday, Election Commission officers went to Singh's house to invite him to vote and gifted him a mug and bouquet as a token of respect. He was also provided with pick and drop facility by the poll body.

Senior citizens and first-time voters stole the show with their enthusiasm as they arrived at different polling stations across the six states and capital of Delhi to cast their votes.

"I am voting for the country. I want to see India on the first position," said 88-year-old Sardar Charan Singh at a booth in Madhu Vihar.

Wheelchair-bound Satya Devi, another octogenarian voter in the capital appealed to all to vote.

"Voting is important for all. I want development in Delhi and want the government to work for public benefit," she remarked.

Most first-time voters were exercised to a part of the elections in the world's largest democracy.

"I was very excited to exercise my right to vote for the first time. I came early to avoid the rush. I want to say to everyone to go vote. Voting is important if people want to be heard," a first-timer, Bhavya said.

59 seats across six states and the capital of Delhi are voting today in the sixth round. The final phase of polling will be held on May 19, and counting of votes will take place on May 23.