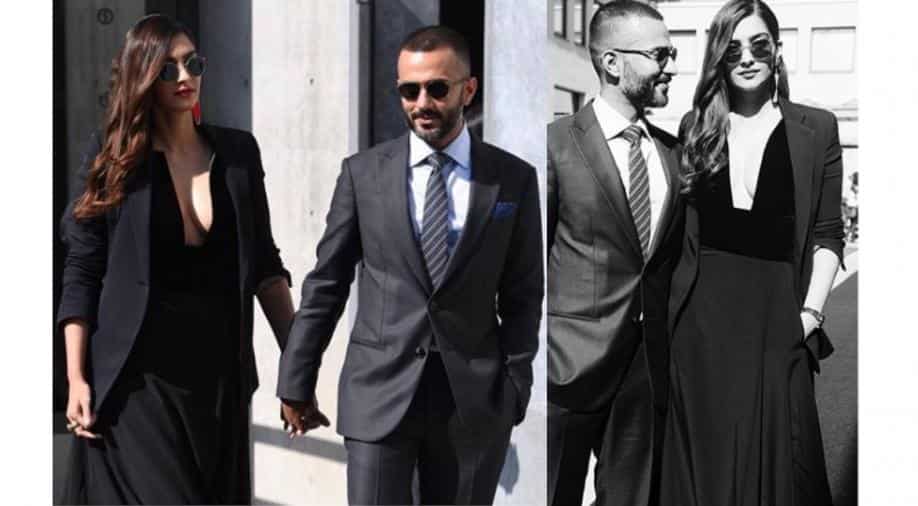 In the post, the first snap features the couple, while Anand is seen lovingly staring at his wife

Bollywood star Sonam Kapoor Ahuja on Friday shared beautiful glimpses of her exotic vacation in London with husband Anand Ahuja and penned down a loveable note for her life partner.

The `Neerja` star hopped on to Instagram and shared a couple of pictures that showcased some candid moments from the time she cherished with the husband.

In the post, the first snap features the couple, while Anand is seen lovingly staring at his wife, as they both smile, and cherish snowfall. The second capture showcases the couple standing hand in hand as they look forward, facing their back at the camera.

The `Prem Ratan Dhan Payo` star shared another picture in which the duo look gorgeous in traditional ensembles, as Anand holds Sonam`s hand in hand and they both smilingly look at each other. The other two captures showcase the couple spending romantic time amid the hills, while they twinned in black ensembles.

Along with these captures from the memorable vacation with her husband, the `Raanjhanaa` star penned an equally adorable caption, She noted, "I love you.. you make #everydayphenomenal."Celebrity followers including filmmaker Homi Adajania and more than 2 lakh followers liked the post, with many leaving sweet comments.

Dia Mirza and Patralekhaa left red heart emojis over the post. Of late, the `I Hate Luv Storys` actor has been updating fans on her activities by posting pictures and videos.

Earlier, Sonam Kapoor shared a photograph with dad Anil Kapoor and sister Rhea as she majorly missed them.