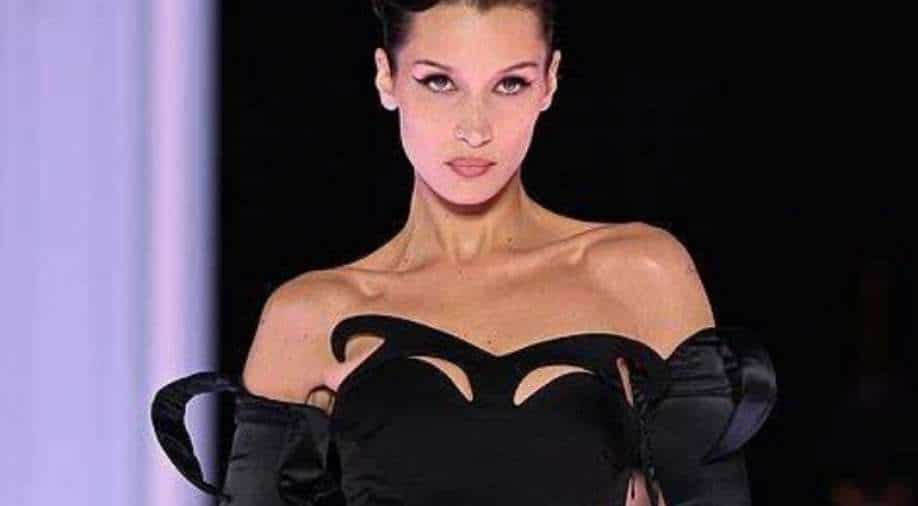 The slogan emblazoned on a black minidress with a flowy train and plunging back by Moschino designer Jeremy Scott captured the zeitgeist of the shows wrapping up Monday.

Perhaps that was the best way, to sum up Milan Fashion Week this season, upstaged by the invasion of Ukraine that began on the second day of runway shows.

The slogan emblazoned on a black minidress with a flowy train and plunging back by Moschino designer Jeremy Scott captured the zeitgeist of the shows wrapping up Monday -- in other words, party while you still can.

Six days of shows from the likes of Versace, Max Mara, Bottega Veneta, Fendi and Dolce & Gabbana that wrap up Monday had finally thrown off the constraints imposed by coronavirus -- digital shows or shows without audiences -- only to be overshadowed by a new world crisis.

That surreal, absurdist tone played out at Moschino on Thursday night, as models -- strutting through a stage set meant to recall the bedroom scene in Stanley Kubrick's "2001: A Space Odyssey" -- were bedecked in sumptuous, ornately adorned gowns with bourgeois home necessities like chandeliers, feather dusters and lampshades on their heads.

In velvet or lace, bedecked with intricate embroidery, brilliant gold, and tulle, the collection was sculptural, stylish and sexy and the height of spectacle -- boosted by Scott's end-of-show bow in a bright red astronaut suit and the presence of an American guest dressed up as a hot dog.

Bronwyn Newport said she had just bought the Moschino outfit from an earlier season with its bun-like cape and front decorated to resemble mustard.

"I'm wearing a couture hot dog," Newport acknowledged, adding that her teenage daughter with her was "not sure if she hates it or loves it".

At Dolce & Gabbana on Saturday, with actress Sharon Stone in the front row, silhouettes were inverted triangles from super-sized shoulder pads while glossy quilted puffer coats went beyond the shoulders to the top of the head, encasing the entire body in a futuristic, yet comforting, cocoon.

Against a backdrop evoking the metaverse -- the future of the internet -- fantastical, fuzzy coats shared the runway with impeccably tailored black jackets with garter belts peeking out, or power suits with exaggerated shoulders in eye-popping shades.

Transparent tunics and gowns were suspended from oversized, visible shoulder pads -- why hide what's below? -- while dramatic black lacing was the focus of a corset-like dress that both encased, and revealed, the body within.

If D&G was time-travelling to the future, DSquared2 on Sunday took a voyage to connect the world "with peace and love", according to show notes.

With layered looks in rusts, browns, mustards and Tartan plaids, accessorised with colourfully patterned caps and ponchos, the garments evoked a night at Woodstock or perhaps a backpackers' bash in the Andes.

Tapping into the current trend for all things puffy, models carried oversized quilted bags in shiny synthetic fabric or shearling, while even boots got puffy, "made for walking softly over unchartered ground".

Sounding a very different tone were stellar collections from Missoni creative director Alberto Caliri, and the much-heralded debut of Matthieu Blazy at the head of storied Italian leather brand Bottega Veneta on Saturday.

Blazy modernised the brand's famous "intreccio", or handwoven leather, giving it a sense of movement while not stepping too far adrift from the label's classic, artisanal cachet.

"Quiet power" was how Blazy described the effect of his men's/women's collection, with playful yet grounded pieces like thigh-high boots with a sculptural heel woven from the same strip of leather and without stitching, or jeans made from soft, printed nubuck.

A petticoat of long strips of lavender leather burst from beneath a full leather skirt in the same colour, the explosion of fringe resembling the thatching of a palapa during vacation. Light, airy slip dresses shimmered through the profusion of nude sequins lending sparkle and texture.

Guests at the show sat atop black leather cushions that doubled as handbags seen on the runway along with woven styles carried over the shoulder via one long woven strap, imparting a luxurious insouciance to the outfits.

At Missoni on Friday, Caliri showed a stunning modern collection that maintained Milan-style elegance while still serving a dose of street cool.

The brand's famous zigzag was clean in black, grey and creme on long narrow coats, but given a vibrant jolt with linings in lime or orange, while stealing the show was a belted, glimmering sequined coat in vertical stripes of marigold orange, mustard, beige and midnight blue.

Knitwear, which is in the label's DNA, had texture and depth, while patterned lurex slip dresses, tube tops and form-fitting gowns were slightly sheer and luminous.