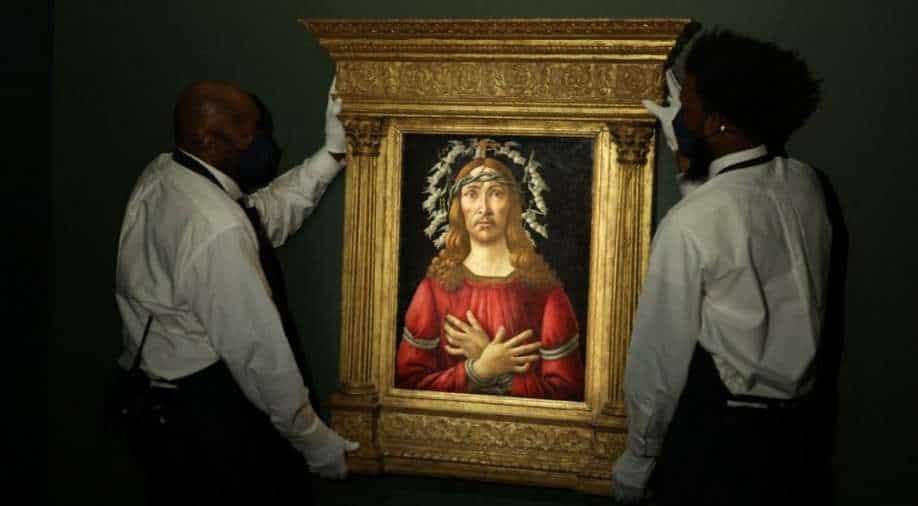 A rare Botticelli under the hammer in New York. Photograph:( Twitter )

While the majority of works by Sandro Botticelli, such as the famous "Allegory of Spring" or "Birth of Venus", are on display at the Uffizi gallery in Florence, pieces circulating in private collections are much rarer.

A rare Botticelli painting depicting Jesus Christ sold at auction for more than $45 million Thursday at Sotheby's in New York, a year after a record $92 million was paid for a work by the Italian Renaissance master.

While the majority of works by Sandro Botticelli, such as the famous "Allegory of Spring" or "Birth of Venus", are on display at the Uffizi gallery in Florence, pieces circulating in private collections are much rarer.

After a seven-minute bidding battle among three buyers via phone, the painting "The Man of Sorrows" sold for $39.3 million, plus fees and commissions, for a total of $45.41 million.

The price was above Sotheby's estimate of $40 million, and more than half the record set in 2021 for the Botticelli painting "Young Man Holding a Roundel," which sold for $92.2 million.

"The Man of Sorrows" is a portrait of Jesus against a black background. He is staring intently, a crown of thorns on his head and surrounded by angels. His hands are bound by ropes and scarred.

Art experts say the painting dates back to the early 1500s, at the end of Botticelli's life (1445-1510). In addition to his works at the Uffizi, the artist's frescoes decorate the Sistine Chapel in the Vatican.

The well-preserved painting had remained with the same family of art collectors, who split their time between Britain and Italy, since the mid-19th century, before being sold to its current owners in 1963 at auction for 10,000 pounds at Sotheby's.

Auction houses benefited from a dynamic art market in 2021, after the pandemic limited supply in 2020. Sotheby's reached its highest sales figure in history -- $7.3 billion -- in 2021.

Thursday's sale, which was devoted to Old Masters, was held in the morning in New York both in person and online, to allow European and Asian buyers to participate.

The Botticelli painting went on a world tour before being displayed in New York. Sotheby's also created a virtual chapel to show off the masterpiece.