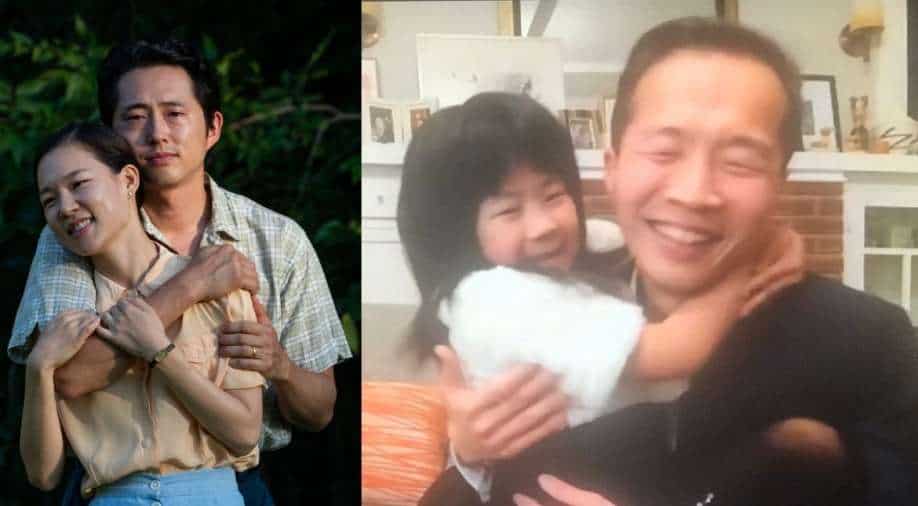 Still from 'Minari' and filmmaker Lee Isaac Chung with his daughter Photograph:( Twitter )

'I prayed that he would win', said the little girl as her father, filmmaker Lee Isaac Chung spoke to press after winning best foreign language film award at the Golden Globes 2021.

Filmmaker Lee Isaac Chung's Korean-American film 'Minari' picked up the best foreign-language film on Sunday at the Golden Globes 2021 but it was Chung's young daughter who stole the limelight with her adorable antics.

As actress Gal Gadot announced the winner of best foreign film category, the show cut directly to Chung's living room where his young daughter hugged him hard and said, "I prayed, I prayed, I prayed," as she sat on her father's lap. Golden Globe Awards 2021: Complete list of winners

Minari wins Best Foreign Language Film and you can hear me cheer but not without mixed feelings. I love Lee Isaac Chung’s acceptance speech about how the language of Minari is from “the heart.” And his daughter! 😍 #GoldenGlobes pic.twitter.com/9EoPcsjHOZ

Later, as Chung sat down to speak to reporters via Zoom, he was asked if he had expected to win the award and his daughter chimed in, "I prayed that he would win!". Golden Globes 2021: Sacha Baron Cohen takes dig at HFPA, Trump in his speech

Chung mentioned how she had picked out a dress especially for the occasion and how excited she was for the ceremony.

The 7-minute long interaction between Chung and a reporter was shared by the official Golden Globes handle and has the filmmaker's daughter walking in between - each time bringing along a new accessory with her as she heard her father address the questions.

Lee Isaac Chung’s @MinariMovie might have won Best Motion Picture-Foreign Language at the #GoldenGlobes, but his daughter is winning our heart in his first post-win interview with the HFPA! pic.twitter.com/KhxjRF5FSX

Her cuteness obviously stole everyone's heart and the internet could not stop gushing over her.

I can't. The adorableness of it all. https://t.co/JvzYhVMuMU

Lee Isaac Chung says his daughter is the reason he made Minari and makes a super endearing speech just in time for Oscar Nomination voting pic.twitter.com/bFN8sVnmwN

I believe his daughter said twice ''I prayed'', while hugging her dad. What a beautiful moment.

Chung- an American filmmaker of Korean descent- made the Korean-American film 'Minari' in the English language. Tracy Morgan apologises for announcing 'Soul' as 'Sal' at Golden Globes 2021

The film though did not find a mention in the best picture category and instead won in the best foreign-language film- a move that was frowned upon by many. The film narrates the story of a Korean immigrant family who arrives in America to pursue the American dream and the hardships they face along the way.