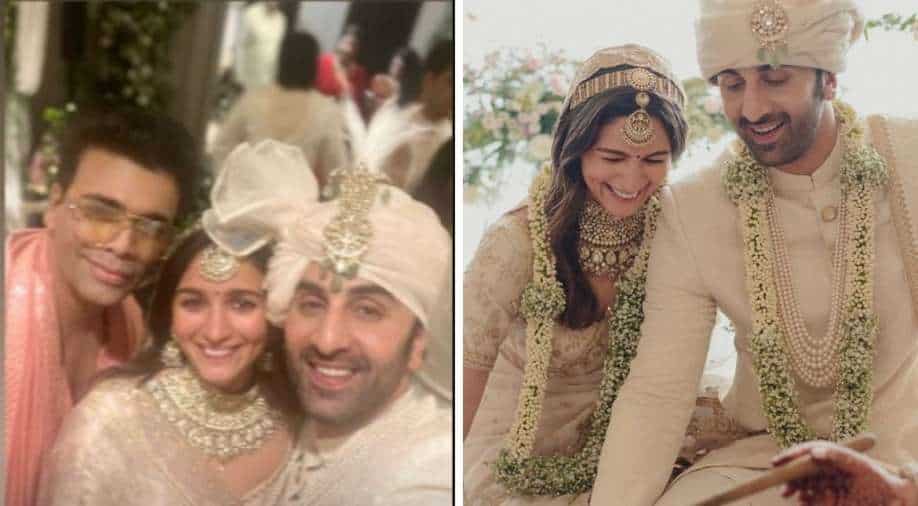 Karan and Alia share a special bond. The filmmaker had even launched the actress back in 2012 in the film 'Student Of The Year' and since then are known to be close.

Karan and Alia share a special bond. The filmmaker had even launched the actress back in 2012 in the film 'Student Of The Year' and since then are known to be close.

Alia considers Karan as her mentor in the film industry and Karan has often stated that he feels paternal towards the actress.

On Thursday, soon after the wedding got over, the maker shared a photo with the newlyweds and wrote, "It's days like this that we live for ...where there is the most beautiful blend of family, love and absolute emotion..... overwhelmed and so full of love in my heart... my darling @aliaabhatt this is such a beautiful life step and my love and blessings go with you everywhere ... Ranbir! I love you... now and forever! You are now my son in law...badhai ho and here`s to decades of happiness," Johar wrote.

Alia and Ranbir's wedding was an intimate affair held at the couple's Bandra abode Vastu, and was attended by the couple's family members and close friends.

The pre-wedding festivities including a special pooja and Mehendi ceremony were conducted on Wednesday.

Alia Bhatt and Ranbir Kapoor wedding: Timeline of their adorable moments together

Ranbir and Alia's upcoming film 'Brahmastra' is produced by Karan Johar- a film where the pair first fell in love. The film has been directed by Ayan Mukerji and hits theatres in September 2022.