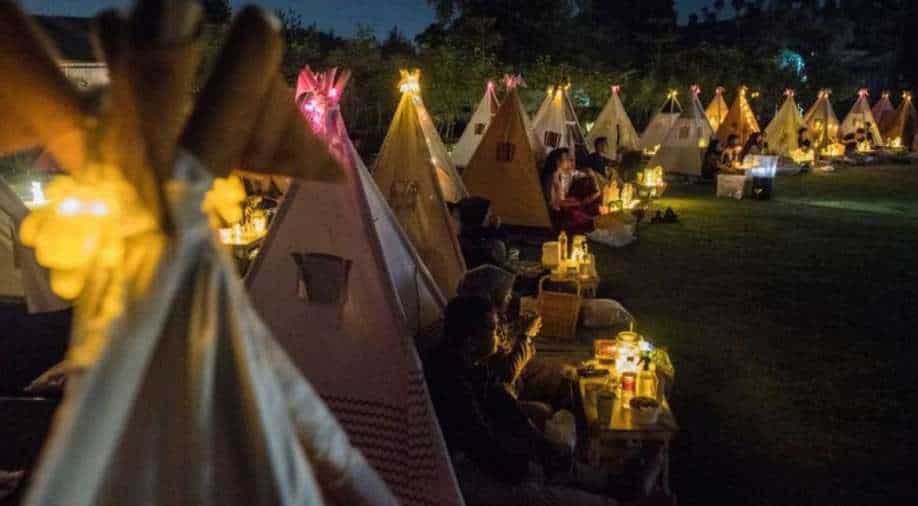 They provide entertainment at the time of pandemic Photograph:( Reuters )

Known as ‘Cinema Under the Stars’, the outdoor camp-style movie space opened two months ago in the capital of Indonesia’s most populous province of West Java with the aim of keeping people both entertained and socially distanced.

Perched on a hilltop overlooking the Indonesian city of Bandung neat lines of teepee-style tents are set up each evening on a patch of lawn in front of a large screen.

Known as ‘Cinema Under the Stars’, the outdoor camp-style movie space opened two months ago in the capital of Indonesia’s most populous province of West Java with the aim of keeping people both entertained and socially distanced.

“Movies are usually watched indoors... but now we have this outdoor cinema with the view of Bandung,” said 20-year-old local resident Lidia Utari.

“And what’s more interesting is that they use tents here, so I wanted to give it a try,” she added.

Supplied with pillows, blankets and snacks, each tent is also equipped with hand sanitiser and disinfectant in line with health protocols, organisers say.

Moviegoers sit at the entrance to the tents with small tables in front with food and drink, all lit up by candlelight.

“We started this business during the pandemic, that’s why we were brainstorming about how to attract visitors as people have a thirst for entertainment in times like these,” said Ilham Fahri Suhada, one of the organisers.

With more than 530,000 infections and 16,000 deaths, Indonesia has the highest number of coronavirus cases and fatalities in Southeast Asia.

Some health experts say limited testing and contact tracing, as well as a high positivity rate - the infection rate per person tested - indicate actual rates may be far higher.

Unlike many neighbours, the world’s fourth most populous country with 270 million people has not had national lockdowns but has instead imposed localised social restrictions.

While tents may not provide much additional protection from the virus, film-goers seem content with the setup.

“I don’t have to worry (about COVID-19) here because they carry out proper health protocols,” said Juliatun Hasanah, 21.