When a fly ruins your image 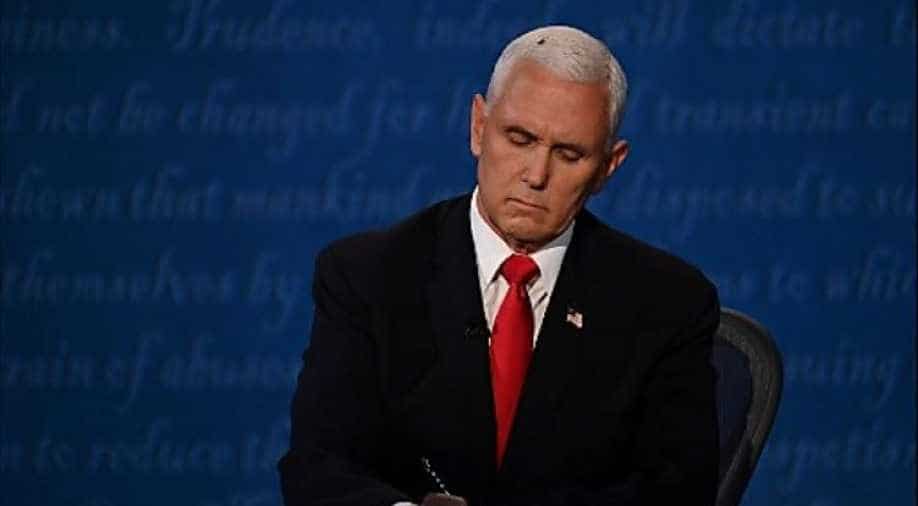 A fly rests on the head of US Vice President Mike Pence as he takes notes during the vice presidential debate against US Democratic vice presidential nominee and Senator from California Kamala Harris in Kingsbury Hall at the University of Utah on October 7, 2020, in Salt Lake City, Utah. Photograph:( AFP )

No matter how much people complain about paying attention to such apparently superficial choices, they inform how we understand what we hear

WASHINGTON — It was the accessory that stole the evening.

Not the discreet strand of pearls and matching earrings worn by Sen. Kamala Harris or the glowing Reagan red tie of Vice President Mike Pence, but rather the fly that landed on Pence’s pure white helmet of hair midway through the vice-presidential debate Wednesday night, and appeared to hang out for a while: a black spot amid the snowy expanse of his coif that was impossible to ignore.

And it kind of undermined his ability to answer the great unspoken question that hung over the event: Does this person look like someone who could be president?

Would he or she be convincing in that role?

After all, as Susan Page, the USA Today journalist who was the moderator, pointed out, both Harris and Pence would serve as No. 2 to the oldest president in history, no matter which candidate wins. There is a real possibility someone ends up in a very different job.

As much as anything in the public arena that is a debate, with the electorate (or a chunk of it anyway) judging little pictures on a screen, maybe tuning into the words, maybe rolling their eyes and tuning out, the candidates’ job was to model what that might look like.

To use the moment not just to get across substantive policy platforms and plans, but also to tap into our lizard brains and connect with the associations buried there between dress and trust, appearance and reliability, familiarity and power.

No matter how much people complain about paying attention to such apparently superficial choices, they inform how we understand what we hear. There’s a reason the best one-liners end up on T-shirts and sweatshirts literally overnight.

Also read| Next US Presidential debate to be 'virtual'; Trump says won't 'participate'

So the fly didn’t help. The TV-watcher-in-chief, with his penchant for “central casting” his administration, could not have been pleased at the mockery it engendered on his favorite social media platform. The fly was the black spot in the ointment of Pence’s image, which has always seemed to belong to a Lego set, or a Build-a-Bear experience (build a politician!). From dark suit to pristine white shirt and favored red ties to snowy hair that appears practically painted on, it’s as if he came straight out of a mold.

That’s effective to a certain extent and may be reassuring for some (maybe without the fly), but it also increasingly seems like a relic from a different time.

Harris, by contrast, is something else: a pioneer, the first woman of color to be nominated for national official by a major political party. She’s the next stage of history.

And when the California senator took the debate stage, she dressed for it. She went fully dark — dark pantsuit, dark shell beneath — even as she smiled and shook her head as if in amazement at the absurdity of what she was hearing from the other side.

In this, she was fully in line with her own recent appearances — she has made something of a practice of wearing dark colors, opting for deep navy for the first debate of the Democratic presidential candidates, and dark burgundy for her speech at the Democratic National Convention — but not the Hillary Clinton-Elizabeth Warren-Nancy Pelosi continuum of fruit bowl-colored jackets and pantsuits. Not the style that has become the accepted outfit for a woman in politics, treading the line as it does between classic male uniform and clichéd female shades. Not even the recent vogue for suffragist white.

Harris opted for a different narrative, one that signals a new generation and a new start and calls to mind ninjas, Navy SEALs and funerals. That has its own risks, but it also has a certain authenticity. She has always had to be a fighter. Why not acknowledge it?

In any case, the look doesn’t exactly feed into the description of her as an extreme liberal, a label that Pence and the Trump campaign keep trying to pin on Harris, and a cartoon all its own. The candidate didn’t come close to playing that part.

Her pearls spoke to tradition: both her own (she has been wearing them since her Howard College graduation photo in 1986) and that of the White House and its first ladies. Barbara Bush famously wore pearls. So did Jackie Kennedy. So did Michelle Obama. On her feet, she wore sharp pumps, not the Converse or Timberlands she has sported on the campaign trail, and that have gone viral. She observed propriety, and the occasion. Her suit was buttoned-up and sedate, with a little American flag pin on the lapel (just like Pence’s). The general effect was not of soft power but of somber power. She looked serious and no-frills and in control.

She looked like her own person. By Thursday morning her reply to Pence’s mansplaining interruptions — “I’m speaking” — had already made it onto merch. No flies on her.