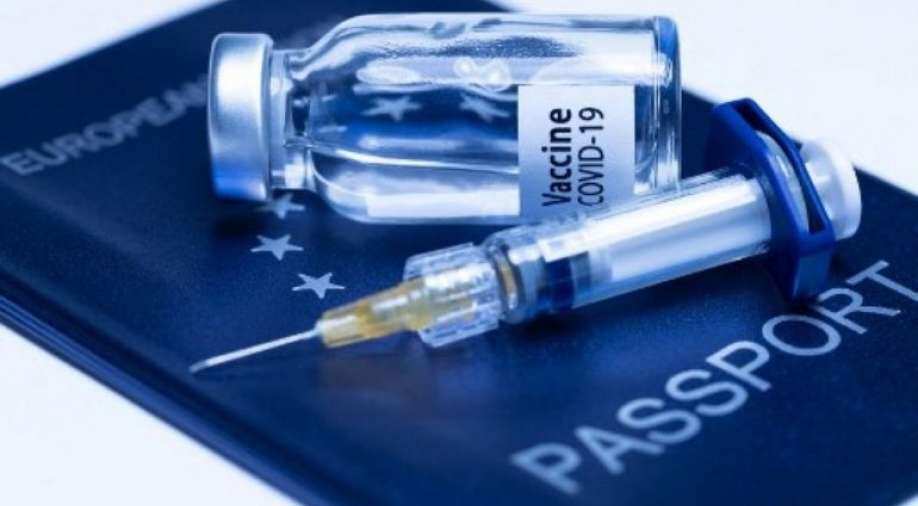 A picture taken on March 3, 2021 in Paris shows a vaccine vial reading "Covid-19 vaccine" and a syringe on an European passport. Photograph:(AFP)
Follow Us

In principle, travellers with a Covid certificate will no longer have to remain in quarantine once they arrive in another EU member state, but exceptions are possible

It has been through a series of name changes and much scientific and political discussion, but the "EU digital Covid certificate" comes into use on July 1.

How will it use data on coronavirus vaccinations, tests and immunity to usher in a return to summer tourism and non-essential travel across the European Union?

What does the certificate record?

Often colloquially referred to during planning as a "vaccine passport", then as a green pass and now a certificate, the digital pass is designed to be recognised and readable by authorities across the European Union.

It will demonstrate whether a bearer has been vaccinated against COVID-19, has been recently tested or has acquired immunity from previously contracting the disease and recovering.

Member states have not agreed to a common standard on when a PCR or lateral flow Covid test must have been performed to remain valid, the rule varies between 24 and 72 hours ahead of arrival.

To prove acquired immunity, a PCR test from the time of the infection can be produced, but the protection is only considered to last for 180 days, and member states may individually decide on a shorter period.

Antibody testing is not yet judged sufficiently reliable to demonstrate acquired immunity, but this will be reviewed within four months of the regulation going into effect.

Also Read | Want to party? You might need a ‘vaccine passport.’

Which vaccines are accepted?

EU members will be asked to allow entry to travellers who have received the required doses of one of the four vaccines that have been approved by the European Medicines Agency: Pfizer/BioNTech, Moderna, AstraZeneca and Johnson & Johnson.

Member states can also choose, but are not required, to approve entry for those who received jabs from a vaccine approved in some member states, such as Russia's Sputnik V, which is used by EU member Hungary.

They can also choose to recognise other vaccines approved by the World Health Organization, such as China's Sinopharm.

If asked to produce a certificate, a traveller can present authorities with a QR code, on the screen of a smartphone or tablet, for example, or printed on paper.

The design contains a unique digital signature which connects a reader to the traveller's Covid data.

Member states will decide individually whether these data are connected to their own national track-and-trace programme, or whether to maintain a separate app.

Also Read | Will you need a vaccine passport in California?

The text adopted by the EU member states provides that the certificate only contain the data "strictly necessary" to oversee safe travel and that the app respect Europe's GDPR personal data protection laws.

The data are not transmitted between countries, only the key that allows the certificate's authenticity needs to be transferred. Data are not retained by the countries of arrival or transit once verified.

Can we escape quarantine?

In principle, travellers with a Covid certificate will no longer have to remain in quarantine once they arrive in another EU member state, but exceptions are possible.

If the epidemic situation in the country or region of departure worsens rapidly or if a dangerous or untested new variant of the virus emerges, measures can be applied.

If a member state wishes to impose such emergency controls, they must inform their partners 48 hours in advance and travellers can consult the "Re-open EU" website to track rule changes.

Is it useful for more than travel?

The EU law concerns European free-movement rules, but individual member states can decide whether they want to use the certificate to control access to other events, such as concerts and festivals, under the terms of national laws.

Vaccination will not be rolled out for children and adolescents in most EU members in time for summer holiday travel, and they may have to undergo testing prior to travelling even if their parents have the certificate.

Which countries are involved?

The certificate system will apply to the 27 member states of the European Union plus their neighbours Iceland, Norway and Liechtenstein.

So far, successful tests of the EU data portal have been carried out in 18 of these countries.

The EU legislation governing the certificate comes into force on July 1 and initially lasts for 12 months.

But there will be a six-week transition period for countries that are not yet ready to implement the certificate under the EU model. During this period other EU members should accept their national vaccine records if they include the same data.

What about the world beyond?

Several EU member states are keen to start receiving visitors from countries like Britain, Switzerland and the United States that are outside the scope of the EU certificate.

Talks are underway with the World Health Organization and air transport associations on how to make systems of certification mutually recognised and interoperable.