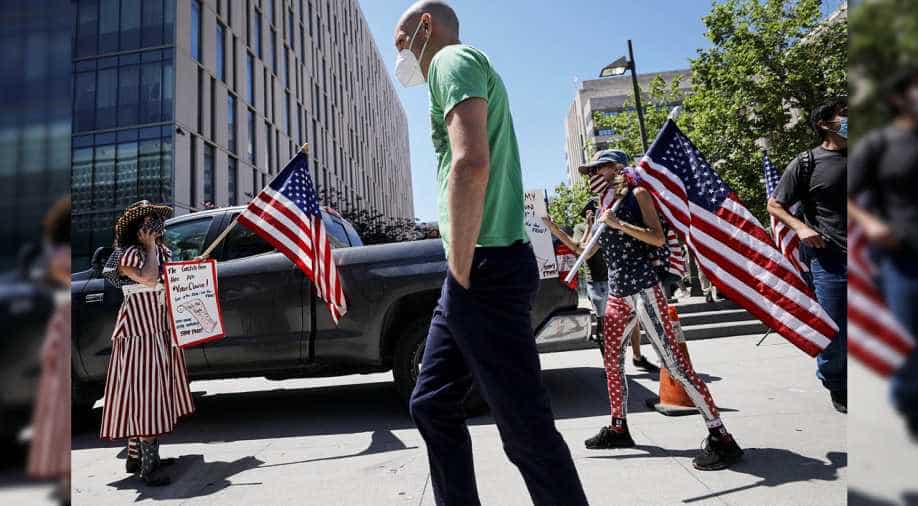 As of Monday, 1 in 4 Californians was fully inoculated and more than 40% of Californians have received at least one shot. All adults 16 and older are eligible to be vaccinated

Baseball is back across California. Tickets to see Bad Bunny early next year were snatched up in no time. The Musso &amp; Frank Grill — the iconic, very much indoors Hollywood haunt — has announced it will reopen May 6.

That’s all been possible, officials and experts say, because increasing numbers of Californians are vaccinated.

And although the biggest hurdle for the state’s vaccine campaign has been a limited supply of doses, that’s changing quickly, officials say.

As of Monday, 1 in 4 Californians was fully inoculated and more than 40% of Californians have received at least one shot. All adults 16 and older are eligible to be vaccinated.

Many businesses have been allowed to reopen — but some can open at higher capacity if they require proof of vaccination or a negative coronavirus test. The state is also allowing larger groups to gather, if everyone is tested or fully vaccinated.

So how does one quickly and consistently prove they have been vaccinated? One option is what has come to be known as a “vaccine passport.”

Here’s what you need to know about what that would mean in California:

What is a vaccine passport?

Mostly, the term has been used to describe a digital certificate of vaccination.

Think of the boarding pass you would show on your phone to get through airport security, or of a digital concert ticket with a QR code.

You should receive a paper vaccination card when you get your first dose, but, of course, any kind of paper document is vulnerable.

Still, experts say that the term “passport” is misleading. It is actually more like vaccine verification — something that has long existed in various contexts and forms. (Schools and summer camps, for instance, often require children to be inoculated against certain diseases.)

“We’re not calling it a passport, because that implies it’s a government-issued document,” Dr. Christopher Longhurst, UC San Diego Health’s chief information officer, told me. “That’s not what we’re talking about.”

Why is there a debate over the use of vaccine passports?

As with most things that involve health data, there are concerns about privacy. And as with everything that involves sorting people into groups of haves and have-nots, there are questions about fairness and ethics.

There are wide disparities in vaccination rates among countries, and vaccine passports could make international travel much easier for residents of wealthy countries.

In the United States, conservative politicians have turned “vaccine passports” into a political and cultural flash point, arguing that they infringe on Americans’ freedom. Some states, like Texas, have barred organizations receiving state money from requiring vaccine credentials.

The White House has said the federal government will not support “a system that requires Americans to carry a credential.”

But legal experts have said that businesses like airlines, concert venues or warehouse operators are within their rights to require employees or customers to do things in the interest of public health. Many businesses have said they want to be able to assure customers that their fellow patrons are inoculated in order to coax them back.

Michael Jerrett, a professor of environmental health science at the UCLA Fielding School of Public Health, told me that as long as there is “equal access” to vaccines themselves, vaccine verification could be used to help prevent workplace outbreaks in the future.

Will I need a vaccine passport if I live in California?

Not exactly. As The Los Angeles Times reported, the state is effectively encouraging venues to require proof of vaccination, as they are allowed to bring in more people if they do.

But state officials have emphasized they will not require them.

So, Longhurst said, the state has effectively “tossed the ball” to private companies.

UC San Diego Health is partnering with the Vaccine Credential Initiative in an effort to ensure that whatever digital vaccine verification is required, there is an “open standard” that is consistent and secure no matter where you go.

“The worst-case scenario is that venues and stadiums all have a different approach,” he said.

Longhurst added that a collaborative, open approach could also prevent a single private company from becoming the sole provider of vaccine verification services, as has been the case for New York, which became the first state to launch a digital health certificate called the Excelsior Pass.

A Republican state lawmaker has introduced a bill that would block state or other government agencies from enacting digital health documentation policies, according to The Sacramento Bee — but the effort is unlikely to go far.