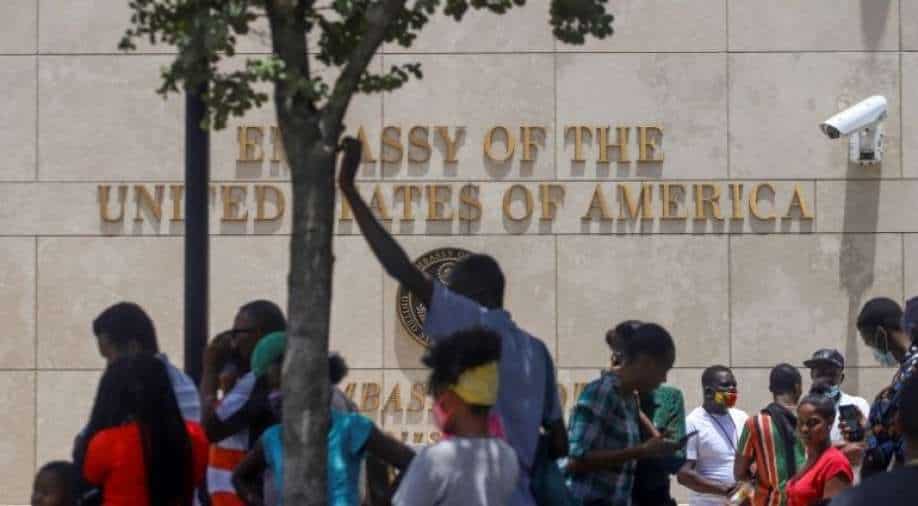 Haitians gather outside the US Embassy after the assassination of President Jovenel Moise, in Port-au-Prince, Haiti July 9, 2021. Photograph:( Reuters )

In spite of its pledge to assist with the investigation, the United States denied Haiti's request for troops to assist with securing key infrastructure following the suspected mercenary assassination of President Jovenel Moise.

On Wednesday, interim Prime Minister Claude Joseph and US Secretary of State Antony Blinken talked about security assistance from the United States.

At the moment, however, military assistance will not be provided by the United States, according to a senior administration official.

Haiti has requested the dispatch of troops to support the national police in reestablishing security and protecting critical infrastructure.

A spokesman for the UN Department of Political and Peacebuilding Affairs, Jose Luis Diaz, said that the UN security council's dispatch of troops would be decided by the fifteen members.

In Petionville, a hillside suburb of the capital Port-au-Prince where Moise lived, a gun battle with the Haitian army led to the capture of 17 men, among them Solages and Vincent.

Police confirmed that three other people were killed, while eight gunmen remain on the loose. Authorities are looking for ringleaders of the assassination.

The authorities are yet to disclose how the assassins got past Moise's security detail or the motive behind the assassination.

Since Moise taking office in 2017, he faced widespread protests; first over corruption charges, then for his economic management and eventually his increasing stronghold on power.

Also read | In the Haitian diaspora: Shock, sadness and a fear of what comes next

On Thursday, the White House pledged that the United States would send top FBI and Homeland Security officials to Haiti to assess the situation and see what they can do to help.

The State Department acknowledged that two US citizens were arrested in Haiti and said they are closely monitoring the situation.

As part of the government's effort to apprehend the killers, Haiti declared a 15-day state of emergency on Wednesday. Since then, businesses there have been urged to reopen.

Since the country had postponed legislative elections in 2019 amid unrest, Moise, and ten senators were the only elected officials and as a result of his death, confusion about the country's legitimate leader has spread, enveloping it further in a political crisis.