US imposes sanctions on two Russian-backed areas in eastern Ukraine 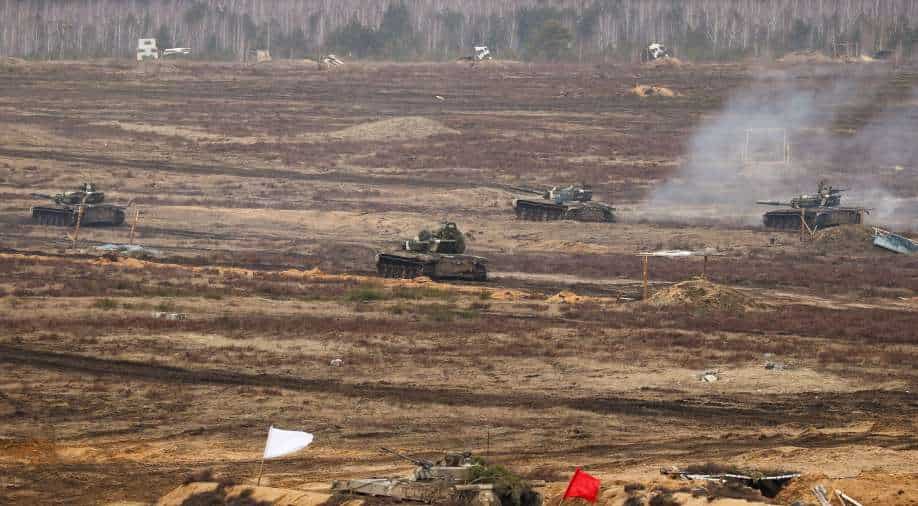 Joint military drills between Russia and Belarus at a firing range in the Brest region, Belarus  Photograph:( Reuters )

After Russian President Vladimir Putin ordered Russian troops to be deployed inside separatist areas of Ukraine, US officials said they would continue to follow diplomacy "until the tanks roll".

Putin announced that Russian troops would act as "peacekeepers" in the Donetsk and Lugansk regions as the treaty "comes into force from the day it was signed".

Putin did not specify the date of troop deployment. Russian forces have been amassed at the border for months amid US warning that Putin forces are ready to invade Ukraine.

"We will never abandon our sovereignty and national values," Putin said. Putin signed the decree recognising the self-proclaimed republics while also urging Russian parliamentarians to sign the treaties with Ukraine's rebel regions even as European nations asked Russian officials not to go ahead.

Under the treaty, Russian forces will have the right to build military bases in the two breakaway regions - Donetsk People's Republic and the Lugansk People's Republic with both sides. The Russian president has sent the two "friendship treaties" to parliament for ratification.

Meanwhile, the UK said it would be announcing "package of sanctions to be introduced immediately".

After making the announcement, Putin said, "We are again being blackmailed by threats to face new sanctions. Which I think they will impose anyway, as our sovereignty and our military forces will grow."

White House Press Secretary Jen Psaki said the US will impose "prohibit new investment, trade, and financing by US persons to, from, or in the so-called DNR and LNR regions of Ukraine" as President Biden signed an executive order.

It will "provide authority to impose sanctions on any person determined to operate in those areas of Ukraine," Psaki said, adding that the sanctions would be widened "should Russia further invade Ukraine."