US election 2020: Trump, Biden try to outshine each other at 9/11 memorials

For the 19th anniversary of the Al-Qaeda terror attacks, the Republican president could steal the show from Biden, as he will be in New York City for the annual event honoring the almost 3,000 people who died in the attacks on the World Trade Center.

President Donald Trump and his Democratic rival Joe Biden on Friday visited the crash site in the key election state of Pennsylvania of one of the planes hijacked during the September 11, 2001 terror attacks on the United States.

Both men seeked to take advantage of the solemn moment to appear as leaders seeking to heal a deeply divided nation.

About 200 people joined the New York ceremony, where the names were read out of the nearly 3,000 people killed when two hijacked jets slammed into the Twin Towers, with a third hitting the Pentagon and a fourth taken down in Shanksville, Pennsylvania, when its passengers rose up against the al Qaeda hijackers.

For the 19th anniversary of the Al-Qaeda terror attacks, the Republican president stole the show from Biden, as he was in New York City for the annual event honoring the almost 3,000 people who died in the attacks on the World Trade Center.

Trump left the White House to attend a morning ceremony at the Flight 93 National Memorial in Shanksville, a White House official said. The event, in remembrance of the 40 passengers and crew who died when the plane plunged into a field after they struggled with the hijackers, will be closed to the public because of coronavirus concerns, the National Park Service said. 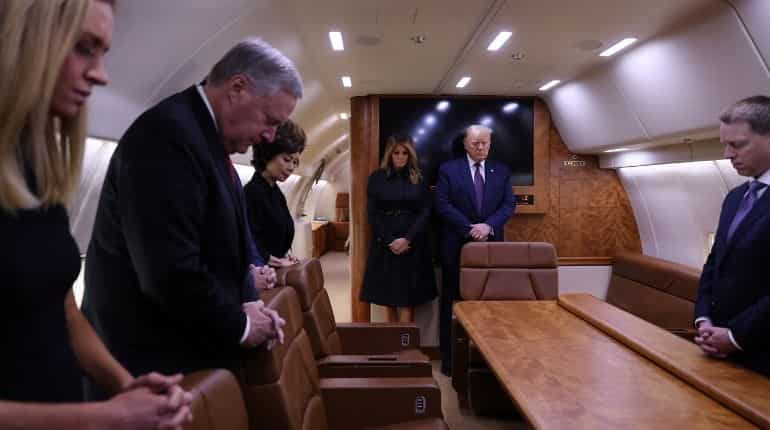 In picture: US President Donald Trump and first lady Melania Trump stand with White House Press Secretary Kayleigh McEnany, White House Chief of Staff Mark Meadows and Transportation Secretary Elaine Chao as they pause for a moment of silence aboard Air Force One while en route to participate in the 19th annual September 11 observance at the Flight 93 National Memorial in Stoystown, Pennsylvania

Whereas, Biden attended a commemoration in Shanksville, Pennsylvania, where an airliner crashed after the passengers tried to wrest control of the plane from the Al-Qaeda hijackers. 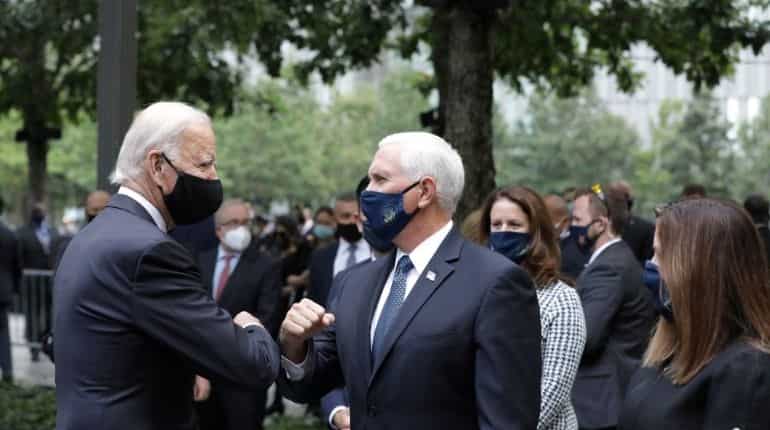 In picture: Democratic presidential candidate and former US Vice President Joe Biden and Vice President Mike Pence greet each other during the 19th anniversary of the 9/11 attacks at the National September 11 Memorial & Museum in New York City

"I'm not going to talk about anything other than 9/11. We took all our advertising down. It's a solemn day, and that's how we're going to keep it, okay?," Biden said.

The two rivals did not cross paths in Pennsylvania: Trump and his wife Melania left Shanksville in the morning after the memorial, while Biden and his wife Jill arrived at the site in the afternoon.

Trump on Thursday escalated his attacks on Biden, calling the former Vice President "the worst presidential candidate in the history of presidential politics."

Trump repeated criticism for Biden over China, accusing him of being a "globalist sellout" who helped engineer the widespread loss of American jobs.

The president's campaign has also accused Biden and his running mate, Senator Kamala Harris, of opposing his administration's efforts to fast-track a vaccine for the coronavirus, which he said was coming "very, very soon."

Long a Democratic stronghold and Biden's home state, Pennsylvania swung narrowly to Trump in the 2016 election, helping him secure his surprise victory over Democrat Hillary Clinton.

Polls show Trump and Biden nearly even in Pennsylvania, and Democrats hope to win the state back in the November 3 vote.

Osama bin Laden and al Qaeda claimed responsibility for the suicide attacks and a US-led war in Afghanistan followed.

US forces killed bin Laden in May 2011 in a surprise raid on his hideout in Abbottabad, Pakistan, ending a nearly 10-year hunt for the al Qaeda leader.