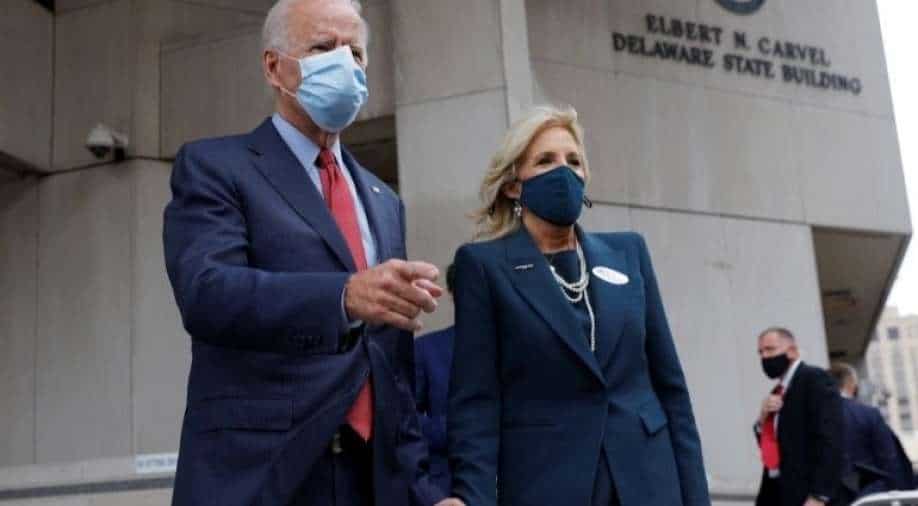 On Wednesday, Biden talked about how he will put a lot of hard work from Day 1 of his Presidency, but cannot bring a magic switch to hop put of the pandemic.

Less than a week away from the US elections 2020, the Democrat candidate and former Vice President Joe Biden cast an early vote with his wife, Jill Biden, in his home town of Wilmington, Delaware on Wednesday.

Biden was seen entering the Delaware States Building in Wilmington on Wednesday shortly after talking to a group of supporters about how he would help the country come out of a pandemic with a better plan.

In the Delaware State Building, Biden cast an early vote and also met other voters who had either voted by mail and/or had voted early. He also met with few health experts to discuss and fine-tune the plan to fight the novel coronavirus — an issue he has been pushing against the current Republican candidate and President Donald Trump to gain the upper hand in the upcoming elections.

Former Vice President's words were a little different from his previous public gatherings and rallies. Earlier, Biden has always claimed that he will help Americans come out of this pandemic as healthy human beings, rather than them losing their loved ones to this deadly virus. However, on Wednesday, Biden talked about how he will put a lot of hard work from Day 1 of his Presidency, but cannot bring a magic switch to hop put of the pandemic. "Even if I win it's going to take a lot of hard work to end this pandemic," he said in Wilmington.

"I'm not running on a false promise of being able to end this pandemic by flipping a switch," he added. "But what I can promise you is this: we'll start on Day 1 by doing the right thing. We'll let science guide our decisions."

To prove his point, he has also been campaigning and holding rallies in small gatherings, unlike Trump who holds gatherings in large grounds and stadiums with little or no precautions and is also often seen boasting about the huge turnout.

Trump, along with the First Lady Melania Trump, voted in-person over the weekend. His daughter, Ivanka Trump, and son-in-law, Jared Kushner, were massively mocked on the internet after the First Daughter posted a picture of the couple holding a mail-in voting envelope while her father sat on his chair onboard the Air Force One — Trump has repeatedly criticised and questioned the authenticity of the mail-in ballots.

The two leaders are now wrapping up their campaign trail with the elections due on November 03.