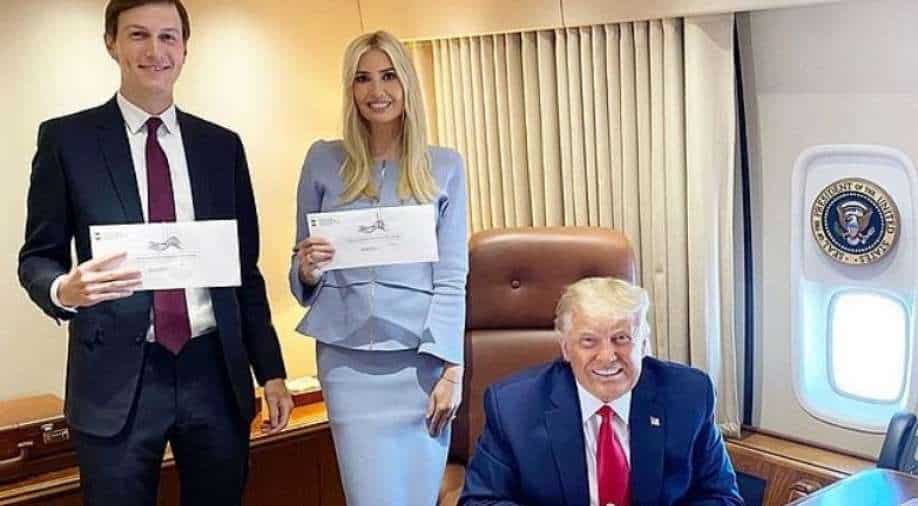 With a week left for the US elections, the current President of the United States Donald Trump has once again questioned the authenticity of the mail-in voting as Joe Biden is promoting the same.

While Trump is repeatedly questioning whether or not the mail-in votes are fair, his daughter Ivanka Trump and son-in-law Jared Kushner defied their father and opted for mail-in voting rather than casting in-person vote.

Ivanka Trump uploaded a picture on her official Instagram account which shows her and Jared Kushner holding their vote envelopes in hand while Donald Trump i sitting in his chair onboard the Air Force One. The picture is captioned, "I’ll give you one guess who we’re voting for???"

I’ll give you one guess who we’re voting for???#Trump2020 🇺🇸🇺🇸🇺🇸 pic.twitter.com/vEGIs2yZM0

As soon as the picture surfaced, social media users of Facebook and Twitter started trolling Ivanka as she has, on various occasions, protested against mail-in voting, matching her father's tune of the mail ballots being a means of corruption and 'massive fraud' used by his rival Joe Biden.

The picture soon became a laughing stock with many users calling Trump a little more scary-looking than usual. Some internet theories also started assuming that the man pictured is a body double of Trump — a theory which holds no truth.

This was in direct contrast with Trump's personal narrative, as Trump, himself, opted for in-person voting in Florida over the weekend and on Monday, too, claimed that the mail-in ballots will lead to frauds. The same question was raised by the president on Tuesday. "It’s the only way we can lose in my opinion is massive fraud," Trump said in Allentown. "It’s the fake ballots right? The phony ballots that are all crooked as hell."