US election 2020: How are votes counted in the presidential election? Although it takes several days for every vote to be counted, it usually becomes clear who the winner will be by the early morning of the next day of the scheduled date for the US election, which this year is November 3

An indirect election is conducted to elect the president and the vice president of the United States. Those who are registered to vote cast ballots, both in person and via mail but not directly for those offices, but for members of the Electoral College.

These electors cast direct votes called 'electoral votes' for electing the president and the vice president. For an absolute majority, a candidate needs 270 out of 538 votes and is then elected to that office. 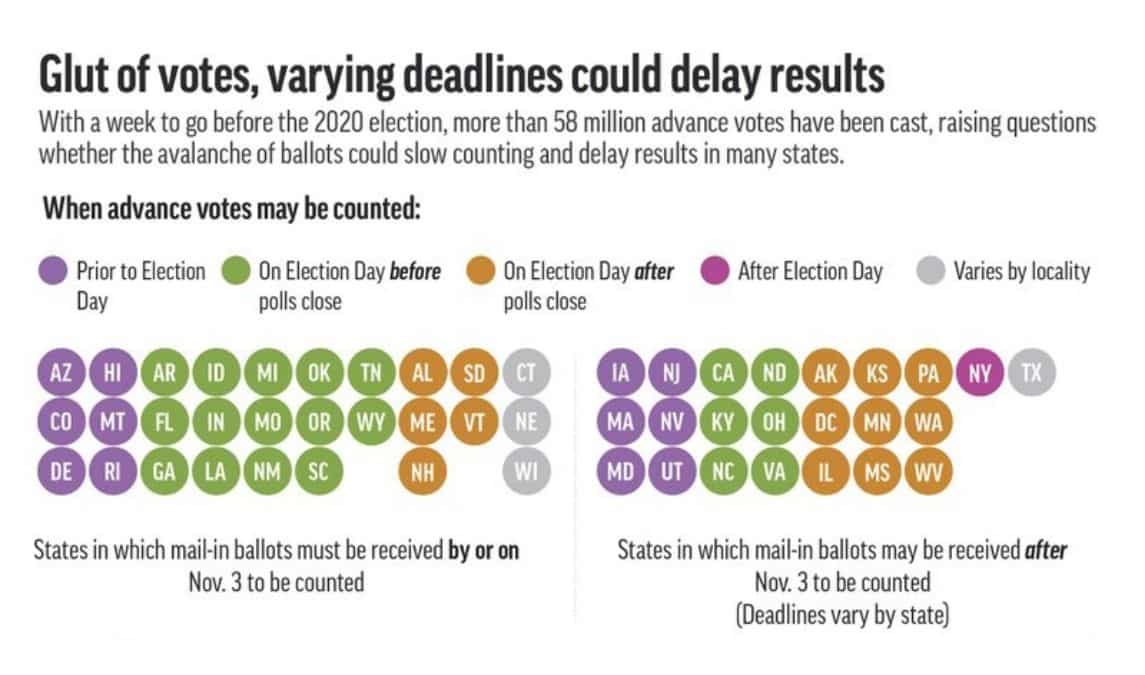 In picture: Graphic shows when states may count advance votes and where mail-in ballots are accepted after Election Day

Also read: You may never get election results: Trump warns against vote count

Although it takes several days for every vote to be counted, it usually becomes clear who the winner will be by the early morning of the next day of the scheduled date for the US election, which this year is November 3.

The voting is halted by different states at different times. On the East Coast, the first polls are closed at 19:00 local time (00:00 GMT).

Major US media outlets call various states when they believe a certain candidate has an unbeatable lead.

However, with a growing tendency among voters to not disclose their true voting intentions on election day, exit polls have become largely unreliable.

Too much dependence on crowd-sourcing or vulnerable technology can act as a disadvantage.

Also read: Inside the Trump campaign’s strategy to make voting a tooth-and-nail fight

Mail-in voting surged in states that held presidential primaries after mid-March when the COVID-19 pandemic exploded.

Millions of Americans are projected to cast mail ballots for the first time this November, with coronavirus expected to drive record-high absentee turnout.

Votes which are sent via mail take a long time to count once they have arrived because every vote must have a signature that is matched with a separate signature on a registration card.

Also, the 50 states in the United States have different rules over how and when they count mail-in ballots.

Also read: In record turnout, over 16 million Americans vote ahead of election day on November 3

While majority states only include postal ballots received by the time polls close on election day, some states such as California will accept votes as long as they are sent by the day of the election. Even if they arrive weeks later.

Whether or not a mail ballot is counted could depend to a large degree on how local election workers enforce mail-in voting rules, how they notify voters who submit deficient ballots, and whether they allow them to fix such errors.

Election experts believe that the number of rejected mail ballots is almost certain to be higher in November than it was in this year’s primaries because of the higher expected turnout.

Each of the US states has a central election authority, but ballots are processed by dozens of separate county or municipal election offices within each state.

US President Donald Trump has said repeatedly and without evidence that a shift to universal mail-in voting, something most states have not proposed doing, will lead to fraud in the November 3 election, when he faces Democratic challenger Joe Biden who currently holds a substantial lead in public opinion polls.

Counting at the polling station:

While voting by mail is an option, many voters wanted to cast their ballot early and in-person to make sure their vote would count.

More than 16 million Americans have cast ballots, setting a record early pace, according to the US Elections Project at the University of Florida. Many seek to avoid the large crowds expected on the election day,due to the risk of contracting coronavirus.

In the last presidential election, some 1.4 million Americans had cast early votes as of October 16, 2016.

However, a majority of people will vote on November 3 and it is expected that fewer polling stations will be open than usual which can lead to a shortage of workers and long queues of voters outside the stations.

This, along with faulty voting machines can also cause delays in counting.