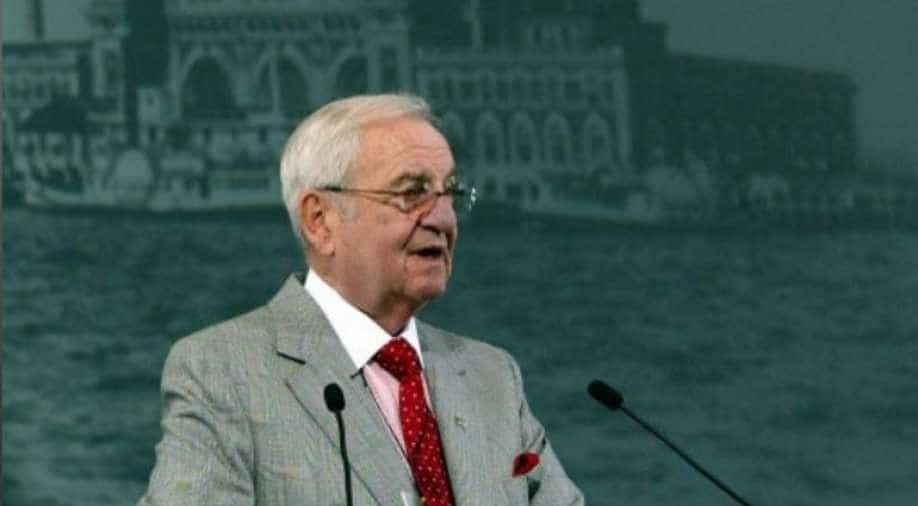 Iacocca died at his home in Bel-Air, a neighbourhood of Los Angeles, from complications of Parkinson's disease, his family told local media.

Automobile industry legend Lee Iacocca, who is credited with creating the iconic Ford Mustang and saving Chrysler from bankruptcy, died Tuesday at the age of 94, US media reported.

Iacocca died at his home in Bel-Air, a neighbourhood of Los Angeles, from complications of Parkinson's disease, his family told local media.

Chrysler said in a statement that the company "is saddened" by news of Iacocca's death.

"He played a historic role in steering Chrysler through the crisis and making it a competitive force," the statement read.

"Lee gave us a mindset that still drives us today one that is characterized by hard work, dedication and grit. His legacy is the resilience and unshakeable faith in the future that live on" in the company's employees.

The man behind the Ford Mustang

Iacocca began his career in 1946 at the Ford Motor Company, first as an engineer and then in sales.

It was his talent in marketing that helped realize his full potential.

Iacocca's first sales campaign in the mid-1950s was so successful that it attracted the attention of company executives and brought him to the Ford headquarters in Dearborn, Michigan.

Iacocca had reaped in massive sales over his career, particularly with the Ford Mustang that he designed in 1957.

However, he was accused of plotting against Chairman Henry Ford II in a quest to reach the top company position.

In a 1992 interview, when Iacocca was asked about the seemingly Machiavellian scheme, he snapped back with characteristic sharpness: "Machiavelli my ass!"

Ford fired him in 1978 -- so Iacocca moved to the floundering Chrysler Corporation.

In 1979, the US government bailed Chrysler out of a potential bankruptcy with $1.5 billion in secured loans. Iacocca took the reins once more and implemented a painful restructuring process.

He had twisted Congress's arm for the loan, and he successfully brought Chrysler back from the brink - then paid off the loan ahead of schedule.

Under his leadership, Chrysler invented the minivan and later the suburban utility vehicle (SUV).

His famous line in Chrysler ads "If you find a better car, buy it!" he would say, pointing at the viewer turned him into a legend.

Iacocca fierce anti-Japanese views he viewed their commercial practices as detrimental to the US at the time earned him support from Democrats and labour unions.

But by the late 1980s, Chrysler took a downturn, and thousands of employees were laid off in order to save the company.

He left Chrysler at the start of the 1990s, and later launched an ultimately unsuccessful hostile takeover bid of the company with billionaire Kirk Kerkorian.

Iacocca said that the Great Depression of the 1930s had a lasting impact on his outlook, especially after his family  Italian immigrants lost everything.

"The Depression turned me into a materialist. I was after the bucks," he said.

When Chrysler was in trouble, he accepted a $1 salary. But when the company recovered, he took home as much as $20 million a year.

"No matter what you have," he once said, "it's never enough."