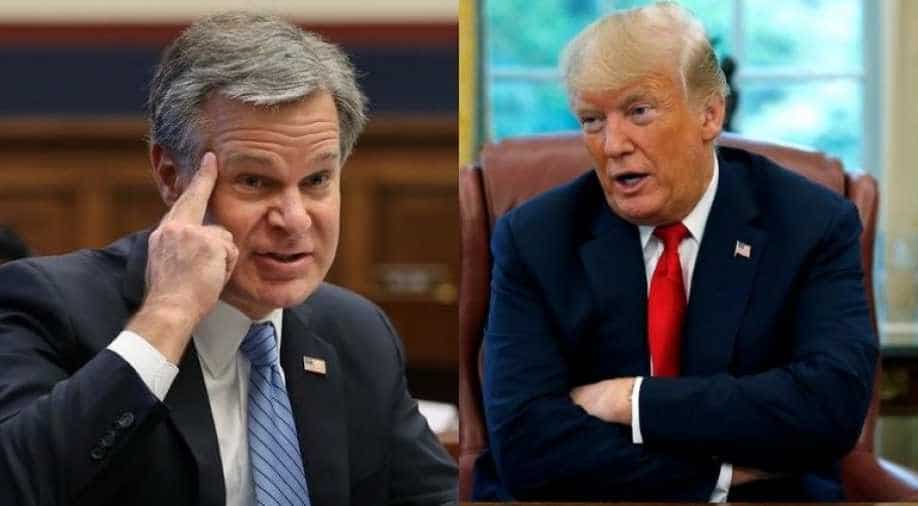 Talking about FBI Director, he said, 'I did not like his answers yesterday. I'm not sure he liked them either. I'm sure that he probably would agree with me.'

After saying the top health expert of the country was confused about vaccines, now the US President Donald Trump is dissatisfied by his FBI Director Christopher Wray's statements on Russia.

Trump, on Friday, said he did not like Wray's answers after Wray openly talked about Russia's involvement in elections, and how the country still poses a threat for the US.

Accused of being funded by Moscow, Trump did not like the comments made by the Director and said, "I did not like his answers yesterday. I'm not sure he liked them either. I'm sure that he probably would agree with me."

Also read| Trump says top health expert was 'confused' about vaccine, but not him

When he was quizzed by the local reporters about the possibility of Wray getting fired — a practice Trump is infamous for since his reality show days — Trump said, "We're looking at a lot of different things."

Trump was unhappy with Wray's claims about the threats posed by the white supremacist groups. The President, who has often been accused of being a racist, felt Wray should have highlighted the dangers posed by China, rather than the domestic groups or Russia. "Within the racially motivated violent extremist bucket, people subscribing to some kind of white supremacist ideology is certainly the biggest chunk," Wray said in his testimony to Congress.

Also read| US Elections 2020: Do election fraud claims made by Trump have substance?

However, Trump wanted the Chief to talk about China. "Obviously China is at the top of the list. I see Russia, North Korea, many other countries, can be talked about. But China would be at the top of that list, so I don't know why that's not mentioned," Trump told reporters.

Talking about the anti-fascist group Antifa, Trump raised doubts about Wray's intentions for not mentioning the left-wing movement in the names that posed danger to the society. "Antifa's a bad group and they're criminals and they're anarchists and they're agitators and they're looters and rioters and everything else," he told reporters.

"They're bad. And when a man doesn't say that, that bothers me. I wonder why he's not saying that," he said of Wray.

"Why he doesn’t want to say that, that certainly bothers me."