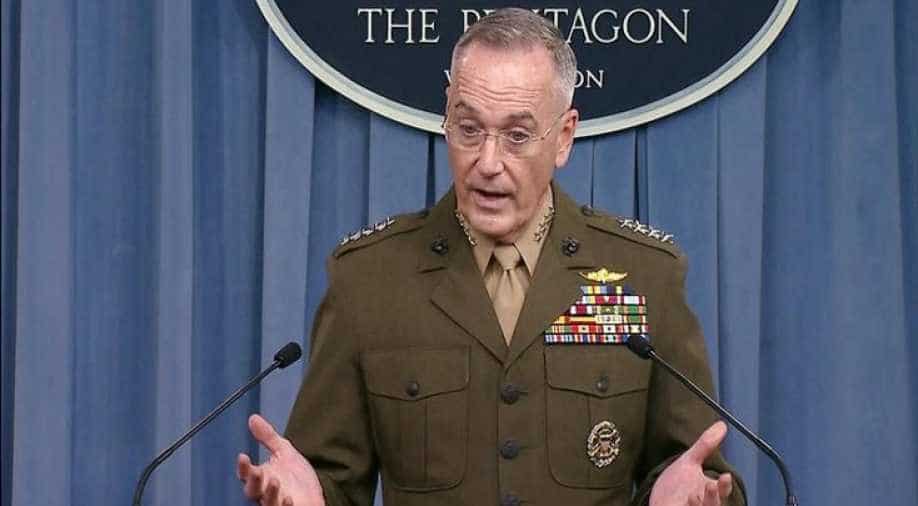 US Military officer clears speculation about the operation in Niger.||The subpoena may get issue against White House for not forthcoming with the details of the attack. ||||

The top US military officer sought on Monday to tamp down criticism the Pentagon had not been forthcoming about the death of four US soldiers in an ambush in Niger, providing a timeline of the incident and acknowledging unanswered questions remained.

General Joseph Dunford, chairman of the US military's Joint Chiefs of Staff, told reporters that the United States Africa Command was conducting an investigation into the Oct. 4 attack. Some lawmakers have criticized the Pentagon for being slow to provide answers.

Dunford acknowledged that a number of issues were still under investigation, including why US forces on the ground waited an hour until they called for support, what type of intelligence was used in the mission and why it took as long as it did to recover a US soldier's body.

"There has been a lot of speculation about the operation in Niger and there's a perception that the Department of Defense has not been forthcoming and I thought it would be helpful for me to personally clarify to you what we know today, and to outline what we hope to find out in the ongoing investigation," Dunford said in a news conference.

US President Donald Trump’s handling of condolence messages to the families of the dead soldiers has been criticized by lawmakers in Washington and has raised the profile of the deadly incident.

Dunford said for the first time that US forces on the ground in Niger waited an hour before calling for support. Within minutes, a US drone located nearby was moved over the firefight and provided intelligence and full-motion video.
French fighter jets arrived at the scene about an hour after that, said Dunford.

"It is important to note that when they didn't ask for support for that first hour, my judgment would be that unit thought they could handle the situation without additional support," Dunford said.

The French fighters did not drop bombs when they arrived, something Dunford said was under investigation.

Republican John McCain, chairman of the Senate Armed Services Committee, said last week he may consider issuing a subpoena because the White House had not been forthcoming with details of the attack.

On Monday, McCain said lawmakers were getting cooperation and information from the Pentagon and expected a "formal hearing" on Thursday about the ambush.

The attack threw a spotlight on the little-known counterterrorism mission in the West African country, which has about 800 U.S. troops, out of a total of 6,000 U.S. troops in Africa. The United States says it is there to support Niger in fighting Islamist extremists.

The Pentagon said at the time that three soldiers had been killed in the ambush. The body of a fourth soldier, Sergeant La David Johnson, was recovered about two days later.

Dunford said that on Oct. 3, a dozen U.S. soldiers accompanied 30 Nigerien forces on a reconnaissance mission near the village of Tongo Tongo.

After spending the night near the village, the forces were moving back to their base when they came under attack from about 50 enemy fighters, who appeared to be from a local Islamic State affiliate. The militants attacked with small arms and rocket-propelled grenades, Dunford said.

"It was planned as a reconnaissance mission," Dunford said. "What happened after they began to execute, in other words, did the mission change? That is one of the questions that's being asked," he said.

The mission had been seen as a relatively lower-risk endeavor for elite US commandos and there was no armed air cover at the time that could carry out air strikes if necessary.

He added there was no indication the soldiers had taken too many risks.

"I don't have any indication right now to believe or to know that they did anything other than operating within the orders they were given," Dunford said.

US forces were conducting normal operations in Niger again and the plan was for them to continue to train and advise local partners. Dunford said there had been no discussions about increasing US troops.

A controversy has swirled for a week over how Trump has handled the task of consoling relatives of slain service members.

Myeshia Johnson, the widow of the Army sergeant killed in Niger, said on Monday that Trump had "made me cry even worse" in a condolence call when he said her husband "knew what he signed up for."

“We owe the families as much information as we can find out about what happened, and we owe the American people an explanation of what their men and women were doing at this particular time," Dunford said.