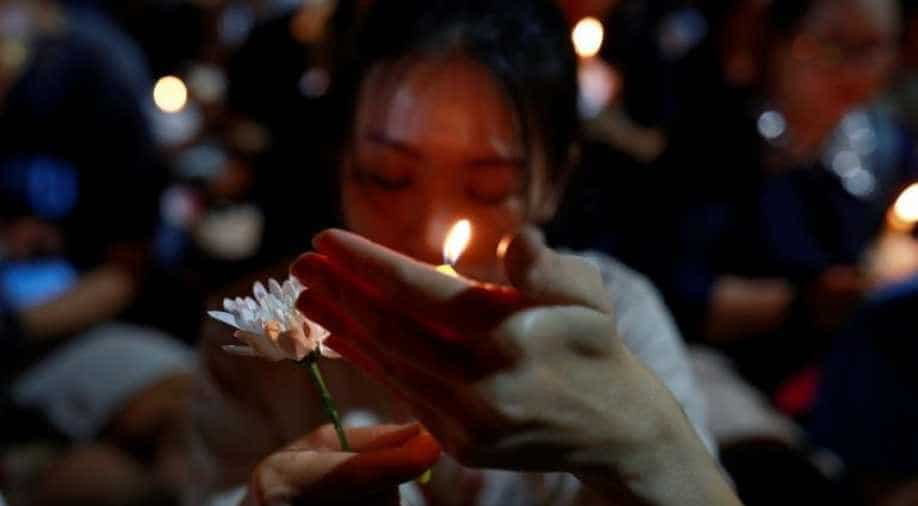 A woman holds a candle light as she prays for victims who died in mass shooting, involving a Thai soldier on a shooting rampage, in Nakhon Ratchasima, Thailand Photograph:( Reuters )

Most of those killed were at the city's Terminal 21 shopping centre, where the shooter held out against an overnight siege with an assault rifle and ammunition stolen from his army base.

Thousands of people holding candles attended a vigil in northeastern Thailand on Sunday for the victims of a rogue soldier who killed at least 29 people and wounded 57 before being shot dead.

Monks led prayers as people laid down white flowers in memory of the victims at the vigil, which was held by the statue of a historic local heroine, Thao Suranari, in the city of Nakhon Ratchasima. Some shed tears as they remembered the dead.

Most of those killed were at the city's Terminal 21 shopping centre, where the shooter held out against an overnight siege with an assault rifle and ammunition stolen from his army base.

"You have this rage, it fills you," said local resident Chirathip Kurapakorn at the vigil.

"I have two kids of my own and just thinking about those lives in there. I could not sleep at all last night. I was just trying to get the right news and just wanted to help somehow, but I just could not."

"It just happened right here in our hometown behind us, like right in our heart of everything. It's just tragic."

The killings began at around 3 p.m. on Saturday when the soldier opened fire in a house before moving to an army camp and then to the mall, where he shot bystanders as he moved inside.

The soldier, identified as Jakrapanth Thomma, was finally shot dead by security forces early on Sunday in the basement of the mall.

"I'm here to pray tribute to those who died. I feel depressed that something like this could happen," said Pacharida Sangthongsuk.