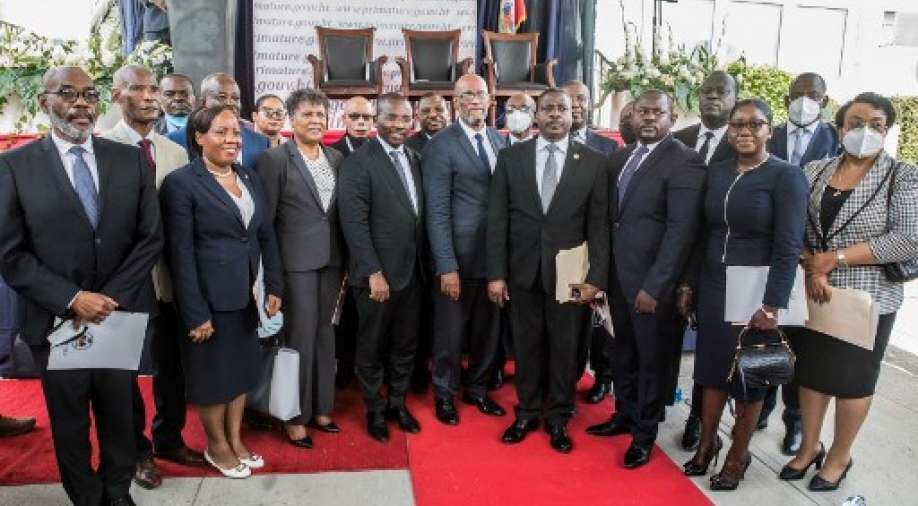 Haiti has no working parliament and no workable succession process, and was already mired deep in a political and security crisis when Moise was killed

Henry was installed as head of a new government in an attempt to stabilisee a country on the brink of chaos since the murder of president Jovenel Moise at his residence in the early hours of July 7.

The swearing-in of Henry, who was named to the post by Moise days before his death, was seen as a key step towards holding elections as demanded by many Haitians and the international community.

After the president was killed by armed commandos, acting prime minister Claude Joseph declared a "state of siege" and said he was in charge, launching a power tussle in the violence-wracked, impoverished Caribbean nation.

"One of my priority tasks will be to reassure the people that we will do everything to restore order and security," Henry said Tuesday to Haiti's population of 10 million people.

"This is one of the main issues that the president wanted me to tackle, because he understood that it was a necessary step if we were to succeed in his other concern of organising credible, honest, transparent and inclusive elections."

The inauguration ceremony in Port-au-Prince was preceded by solemn tributes to Moise, including speeches, dancing and music on a stage set with bouquets of white flowers and a giant portrait of the assassinated president.

Haitian authorities, with the help of the US Federal Bureau of Investigation, are still investigating the murky motives for Moise's assassination.

More than 20 people, many of them retired Colombian military personnel, have been arrested in connection with the killing.

In the new government, Joseph, who agreed to stand down and cede the role to Henry, returned to his former post as foreign minister.

Moise, 53, had ruled Haiti, the poorest country in the Americas, by decree after legislative elections due in 2018 were delayed in the wake of multiple disputes, including on when his own term ended.

As well as presidential, legislative and local elections, Haiti had been due to have a constitutional referendum in September after it was twice postponed due to the coronavirus pandemic.

In the power struggle after Moise's killing, the balance tipped towards Henry when ambassadors -- including from the United States, France and the United Nations -- informally threw their support behind the 71-year-old neurosurgeon.

Haiti has no working parliament and no workable succession process, and was already mired deep in a political and security crisis when Moise was killed.

Haitian police have accused a Haitian doctor with ties to Florida, Christian Emmanuel Sanon, of being a mastermind of the plot and having "political objectives."

"All the culprits, perpetrators and sponsors must be identified and brought before Haitian justice," Henry, who has previously held several ministerial jobs, said in his speech.

"And I hope that exemplary and dissuasive sentences will be pronounced. The nation expects no less from its leaders. Never again will we have to relive such a tragedy."

"The solution to the Haitian crisis must come from the Haitians," he added.

"Everything is negotiable, except democracy, elections and the rule of law."

Henry also thanked international partners for the arrival of the country's first batch of Covid-19 vaccines, which arrived last week in a nation with scarce health resources.

The United States, which exerts wide influence in Haiti, welcomed the new government, with Secretary of State Antony Blinken saying it was "a positive and necessary step to respond to the Haitian people’s needs and begin restoring Haiti's democratic institutions."

Moise will be laid to rest on Friday in the northern city of Cap-Haitien. His widow Martine, who was seriously wounded in the attack, was treated in a Miami hospital before returning home over the weekend.