Protesters in US march against prospect of war with Iran 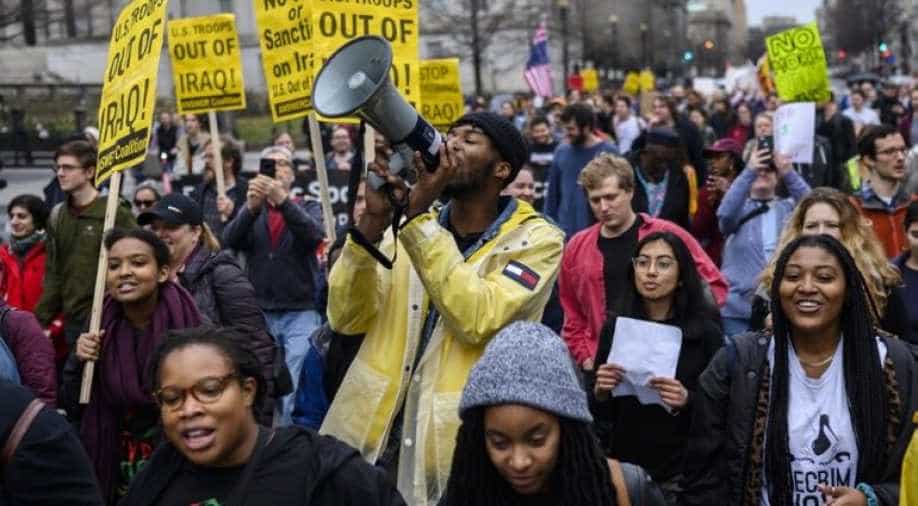 Protesters in a rally in US  Photograph:(AFP)
Follow Us

Outside the White House, around 200 people gathered as part of a wave of rallies called by left-leaning organizations. They chanted slogans including 'No Justice, No Peace, the US out of the Middle East'.

Demonstrators chanting "no war on Iran" rallied Saturday in Washington, New York and across the US to protest the assassination of a top Iranian military commander in a US drone strike.

Outside the White House, around 200 people gathered as part of a wave of rallies called by left-leaning organizations. They chanted slogans including "No Justice, No Peace, the US out of the Middle East."

Organizers said demonstrations were convened in some 70 US cities to denounce the killing of Major General Qasem Soleimani early Friday in Baghdad on orders from President Donald Trump. The attack has prompted fears of a major conflagration in the Middle East.

"We will not allow our country to be led into another reckless war," one speaker outside the White House said.

The protesters later headed toward the Trump International Hotel, which is just down the street from the presidential mansion.

"Need a distraction? Start of a war" read a sign held by Sam Crook, 66.

Trump faces a looming trial in the Senate following his impeachment by the House of Representatives in the Ukraine scandal.

Crook described himself as concerned.

"This country is in the grip of somebody who's mentally unstable, I mean Donald Trump, that is. He's not right in the head," Crook told media.

"He's crazy and has a childish reaction to everything. And I'm afraid he's going to inadvertently, he doesn't really want to, I think, but I think he could easily start some sort of a real conflagration in the Middle East," Crook added.

Shirin, a 31-year-old Iranian-American who would not give her last name, said she was worried about the possibility of war with Iran, which has vowed revenge for the death of Soleimani.

"We already spent trillions of dollars fighting unjust wars in Iraq and, you know, the longest war today in Afghanistan. And what do we have to show for it?" she said.

She argued that the 2003 US-led invasion of Iraq caused instability throughout the region and strengthened Iran, "which is now, you know, a major political, social and cultural force in Iraq."

At Times Square in New York, demonstrators marched with signs crying out against the prospect of war with Iran and calling for the withdrawal of the 5,000-odd US troops in Iraq.

"War is not a re-election strategy," read one sign-in that procession.

Demonstrators also marched in cities including Chicago and Los Angeles.