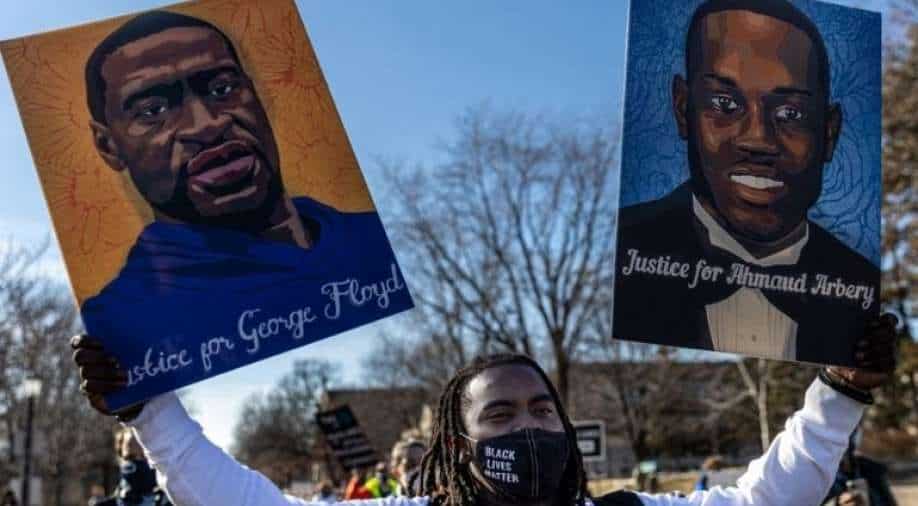 A protester holds placards with the pictures George Floyd and Ahmaud Arbery as demonstrators gather outside of Minnesota Governor's residence Photograph:( AFP )

The defendants, Gregory McMichael, his son Travis McMichael and their neighbor, William "Roddie" Bryan Jr., have claimed that they were chasing Arbery to make a citizen’s arrest

First witness in the Ahmaud Arbery murder was called to testify. Glynn County Police Officer William Duggan claimed that he was close to the crime scene so he responded to the situation immediately after completing an off-duty job.

Duggan testified that when he reached the crime scene, he spotted a few other people around the Black male who was on the ground. He later identified those 'other people' as the defendants.

He also added that when he saw Arbery lying on the ground, he felt that Arbery was already dead and there was nothing he could do for the victim.

During the opening remarks of the prosecutor Linda Dunikoski, the court also saw video submitted by the police officer who was first to reach the scene of crime. Dunikoski had argued that the defendants had chased Arbery and fatally shot him without having any evidence that he was doing anything illegal.

"In this case, all three of these defendants did everything they did based on assumptions," she said. "Not on facts, not on evidence -- on assumptions. And they made decisions in their driveways based on those assumptions that took a young man's life. And that is why we are here."

However, the defendants, Gregory McMichael, his son Travis McMichael and their neighbor, William "Roddie" Bryan Jr., have claimed that they were chasing Arbery to make a citizen’s arrest. The defendants said they had suspected that Arbery had stolen something from a house which was under construction nearby. Their lawyers also argued that Travis McMichael shot Arbery only as an act of self-defense.

The shocking murder dates back to February 23, 2020. In an area near Brunswick, Georgia, 25-year-old Ahmaud Arbery, a Black man, was out for his daily jog when he was attacked and shot dead by three White men. It is believed that the murder was a result of racism.