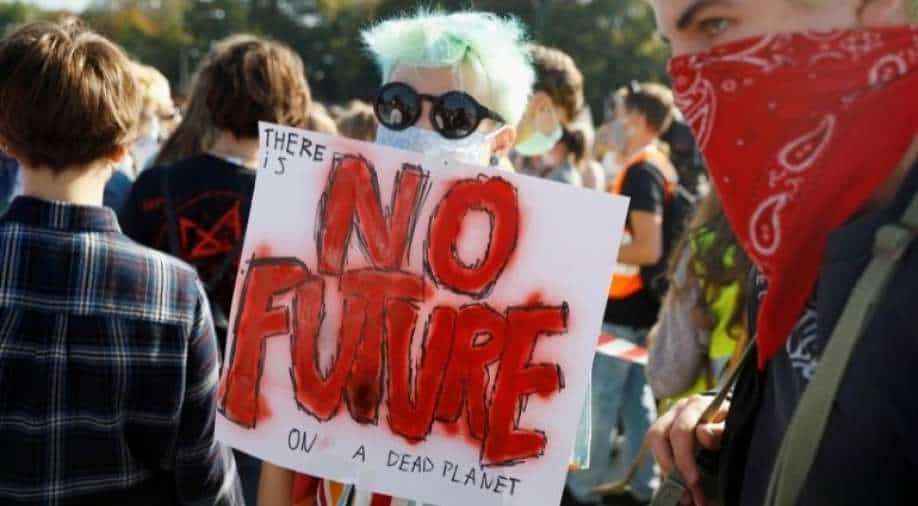 A person holds a sign as Fridays for Future protesters demonstrate for a "Global Day of Climate Action" in Warsaw, Poland, September 25, 2020. (File Photo) Photograph:( Reuters )

Five individuals in Poland are taking the government to court over its alleged failure to protect them from the impact of climate change, the first such litigation in the coal-reliant country, legal charity ClientEarth said on Thursday.

Poland plans huge investments in offshore wind power and wants to build its first nuclear power plant to cut carbon emissions, but activists have criticised Warsaw for being slow to phase out coal and improve air quality.

It was the only European Union member state not to pledge to achieve net-zero greenhouse gas emissions by 2050 when the bloc set the target in 2019. Poland's conservative government has long courted political support from interests in the coal industry, which provides around 70 per cent of the country's energy.

"I can see climate change...There are three ponds on my farm, all three are practically dry already," said Piotr Romanowski, a farmer from Poland's northeast and one of the five litigants.

"I am filing this lawsuit because the Polish government is doing nothing to prevent this situation, to prevent climate change," he said in a statement.

The other litigants are an ecotourism business owner, parents from different families, and a young climate campaigner. Three of the cases were filed on Thursday with a further two to be filed later this month in regional courts.

The five will ask the courts to rule that Poland must commit to a 61 per cent reduction in greenhouse gas emissions from 1990 levels by 2030, and climate neutrality by 2043.

"(These five) cases are the first to expose the emerging effects of climate change on people living in Poland," ClimateEarth said in a statement.

Officials at Poland's climate ministry did not immediately respond to a Reuters' request for comment.

Earlier this week local authorities said that the lignite-fired Belchatow power plant in central Poland, the worst single polluter of its kind in Europe, would be closed by 2036.

Poland has also been sued by the neighbouring Czech Republic at Europe's highest court over the current expansion of the Polish Turow open-pit brown coal mine near the two countries' border.