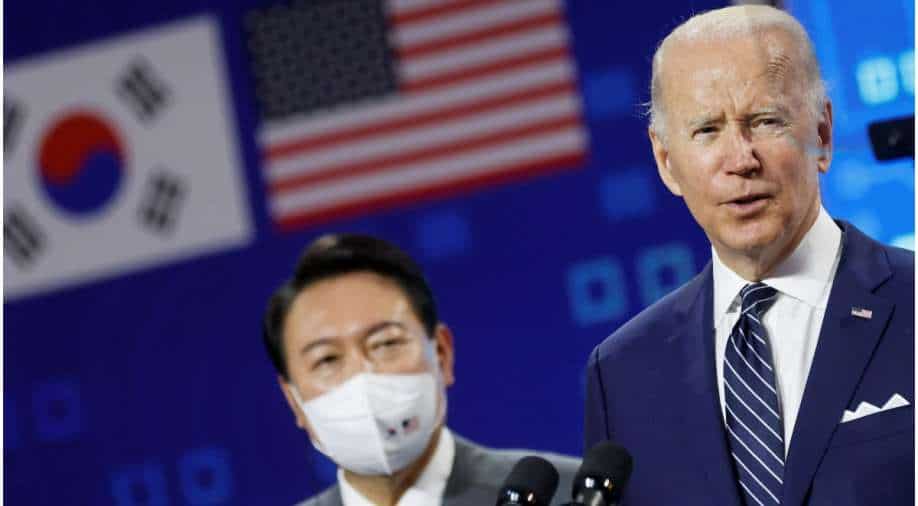 US President Joe Biden is due to meet South Korean President Yoon Suk-Yeol on Saturday in a first meet between the two leaders since the latter's inauguration 11 days ago. The talks are expected to be about North Korean nuclear threat and a political stalemate with the countrty. There are worries that North Korean leader Kim Jong Un would carry out new nuclear tests.

Biden and Suk-Yeol are due to meet in South Korean capital Seoul. Inputs by US intelligence suggesting possible North Korean nuclear tests has cast shadow over talks between two leaders.

A senior Biden administration official told reporters on Saturday that the two leaders will discuss nuclear cooperation and that Washington remains ready for diplomacy with North Korea.

"It is very much our desire that we find ways to have a diplomatic approach," the official said. "We have made very clear we're prepared to talk to them, and with no preconditions, and we're also prepared to take steps to address their domestic challenges, including COVID."

It is yet unclear how the US and South Korea plan to engage the north. The Kim Jong-Un led country has rebuffed USA's engagement efforts since Biden took to office.

Yoon has signalled a tougher line on North Korea than his predecessor and is expected to ask for Biden's help. Yoon has warned of a preemptive strike if there is a sign of an imminent attack and vowed to strengthen the South's deterrent capability.

North Korea's first acknowledged COVID-19 outbreak, which the U.S. official described as "quite serious", may provide an opening.

"We are very concerned about the COVID situation," the official said. "We are very sensitive to the fact that they appear to be facing a quite serious situation, and I think you've seen we stand ready to work with others in the international community as needed to provide assistance."

North Korea reported more than 200,000 new patients suffering from fever for a fifth consecutive day on Saturday, but the country has little in the way of vaccines or modern treatment for the pandemic.