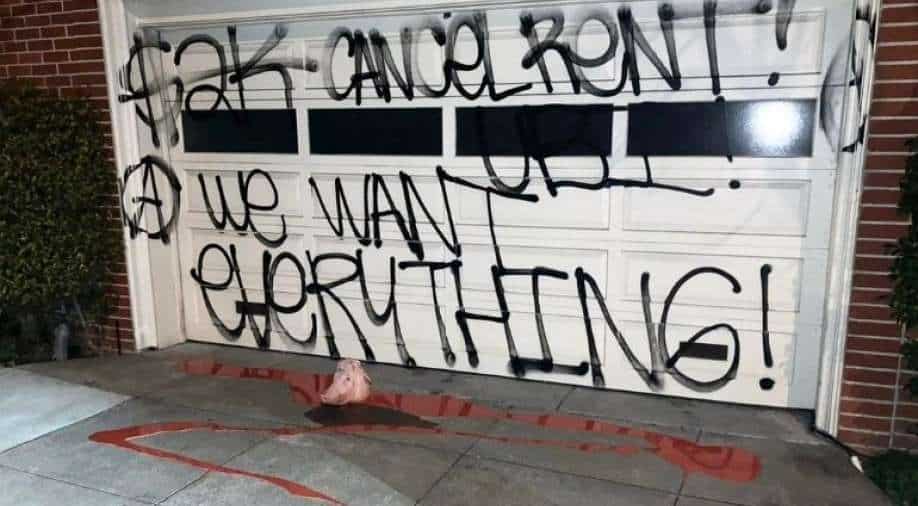 A few hours after the graffiti was reported, the garage door was covered with black-coloured garbage bags, and an investigation was initiated

The US Speaker Nancy Pelosi has once again faced the public wrath as someone vandalised her house in San Francisco in the early hours of the new year, local police department confirmed.

San Francisco police department was called to 2640 Broadway in the Pacific Heights neighbourhood after the garage door of the house was spray-painted with hate messages and a pig's head was left on the sidewalk with a layer of (assumably) fake blood on the floor.

The graffiti painted on her white garage door read messages such as 'cancel rent' and 'we want everything' and a struck '$2K'. This is being assumed as a public outrage after Pelosi failed to approve a $2,000 worth coronavirus relief package for the US citizens.

So @SpeakerPelosi’s house was VANDALIZED with red paint, PIGS HEAD & BLOOD 🩸 what does the A inside of the circle ⭕️ mean? pic.twitter.com/ntZ9PhMSPy

A few hours after the graffiti was reported, the garage door was covered with black-coloured garbage bags, and an investigation was initiated. While the police were immediately called at the house, it is still unclear if Pelosi was inside the house when the incident happened.

This outrage has come after the US citizens received a $600 relief check for coronavirus pandemic, months after they were first sent a $1,200 checks. The amount was highly criticised by the opposition leaders, along with masses who have had to bear the grunt of a collapsing economy.

Pelosi is the only woman to serve as the US Speaker till date. After working with the Trump administration, Pelosi, the Democrat leader, is hoping to be re-elected as the speaker once the Congress resumes operation under the incoming President Joe Biden.