Mass graves being prepared for earthquake victims in Afghanistan 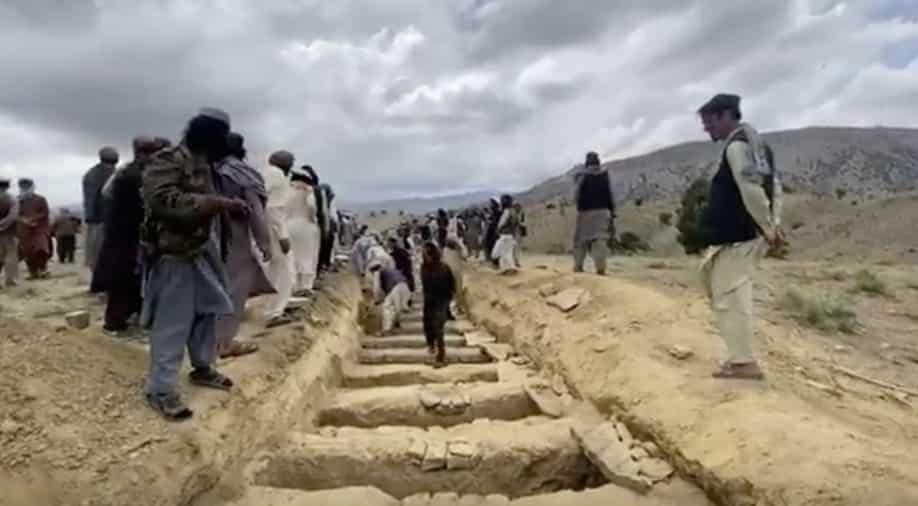 The magnitude 6.1 earthquake struck early on Wednesday about 160 km (100 miles) southeast of Kabul, in arid mountains dotted with small settlements near the border with Pakistan, as reported by Reuters.

Mass graves are being prepared for earthquake victims in Paktika, where over 1,000 have been killed and around 1,500 have been wounded. The magnitude 6.1 earthquake struck early on Wednesday about 160 km (100 miles) southeast of Kabul, in arid mountains dotted with small settlements near the border with Pakistan, as reported by Reuters.

Poor communications and a lack of proper roads are hampering relief efforts in a country already grappling with a humanitarian crisis which has deteriorated since the Taliban took over last August. "The rescue operation has finished, no one is trapped under (the) rubble," Mohammad Ismail Muawiyah, a spokesman for the top Taliban military commander in the hardest-hit Paktika province, told Reuters.

Mohammad Nassim Haqqani, a spokesperson for the disaster ministry, told Reuters rescue operations had finished in major districts but were continuing in some isolated areas.

The United Nations said on Thursday the Taliban ministry of defence had indicated as early as Wednesday 90 per cent of search and rescue operations had been completed. The death toll makes it Afghanistan's deadliest earthquake in two decades, according to U.S. government data.

The town of Gayan, close to the epicentre, sustained significant damage with most of its mud-walled buildings damaged or completely collapsed, a Reuters team said. The town, with only the most basic roads, was bustling with Taliban soldiers and ambulances as a helicopter bringing in relief supplies landed nearby, whipping up huge swirls of dust. About 300 people sat on the ground waiting for supplies.

Abdul Qahar Balkhi, spokesperson for the Afghan foreign ministry, on Thursday, repeated calls for international aid. "We call on natural disaster management agencies and the international community to provide immediate and comprehensive aid to the Afghan people," he said in a tweet.

Afghanistan's economy has all but collapsed, U.N. Secretary-General Antonio Guterres said in an appeal to aid donors in late March. Drought has undermined food production and 9 million Afghans face famine. Some families have been forced to sell children and organs to survive, he said.