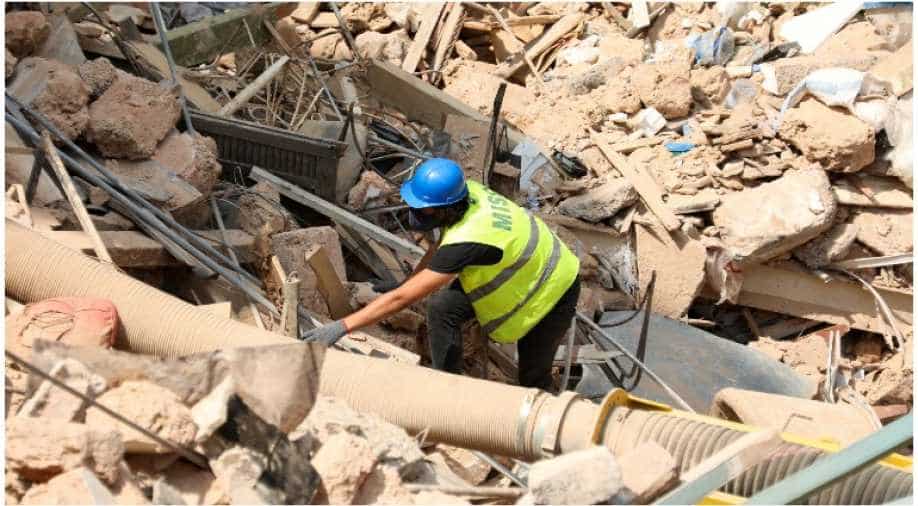 FILE PHOTO: A volunteer digs through the rubble of buildings which collapsed due to the explosion at the port area, after signs of life were detected, in Gemmayze, Beirut, Lebanon Photograph:( Reuters )

Beirut Port was devastated in a huge blast on August 4. More than 2 thousand tonnes of Ammonium Nitrate went up in flames and caused a blast that killed at least 190 people and injured more than 6000 people.

Lebanon army said that it found 1.3 tonnes of fireworks at Beirut port devasted by the huge blast that took place in August. The blast was blamed on large quantity of chemicals stored in poor condition.

Lebanese army released a statement on its website on Friday and said that 1320 kgs of fireworks were found in 120 boxes. Army engineers disposed of them.

'No evidence' of Hezbollah storing Ammonium Nitrate in France

France's foreign ministry on Friday said there was no evidence to suggest the armed wing of Lebanon's Hezbollah was storing chemicals to make explosives in France after a senior U.S. official said the group had set up caches in Europe since 2012.

Speaking on Thursday, Nathan Sales, the U.S. State Department's coordinator for counterterrorism, accused the Iran-backed group of smuggling and storing chemicals, including ammonium nitrate, from Belgium to France, Greece, Italy, Spain and Switzerland.

"It stores these weapons in places so it can conduct major terrorist attacks whenever its masters in Tehran deem necessary," Sales said in a briefing without elaborating or providing evidence of the activities.

"To our knowledge, there is nothing tangible to confirm such an allegation in France today," foreign ministry spokeswoman Agnes von der Muhll told reporters in response to Sales' allegations.