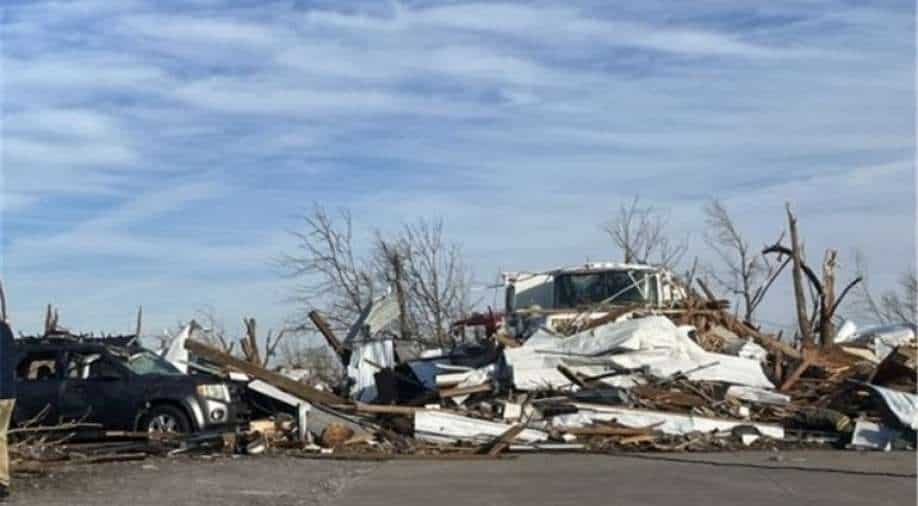 Photo taken on December 11, 2021 shows a heap of rubble after tornadoes in Mayfield, Kentucky, the United States. Photograph:( IANS )

The death toll from the devastating storms that wreaked havoc on Kentucky towns is expected to top 100, according to the governor, as hope of finding survivors fades.

The death toll from record tornadoes that ripped over hundreds of miles of Kentucky this weekend was expected to top 100, with many still missing and contradictory reports on the number of survivors as rescuers scrambled to examine wreckage.

With at least 80 verified deaths, Governor Andy Beshear stated this was the most deadly tornado event in the state's history.

"I know we’ve lost more than 80 Kentuckians. That number is going to exceed 100. This is the deadliest tornado event we have ever had... I’ve got towns that are gone, that are just, I mean, gone, "Beshear said on Sunday.

Twisters destroyed a candle factory and fire and police stations in a small town in Kentucky, ripped through a nursing home in neighbouring Missouri, and killed at least six workers at an Amazon warehouse in Illinois, according to weather forecasters.

The previous record for the longest tornado in the United States was a 219-mile storm in Missouri in March 1925, which killed 695 people.

Outside of the spring and summer months, huge events like this are relatively rare.

Rescuers examined the wreckage for survivors in Kentucky, while crews gave water and generators to residents.