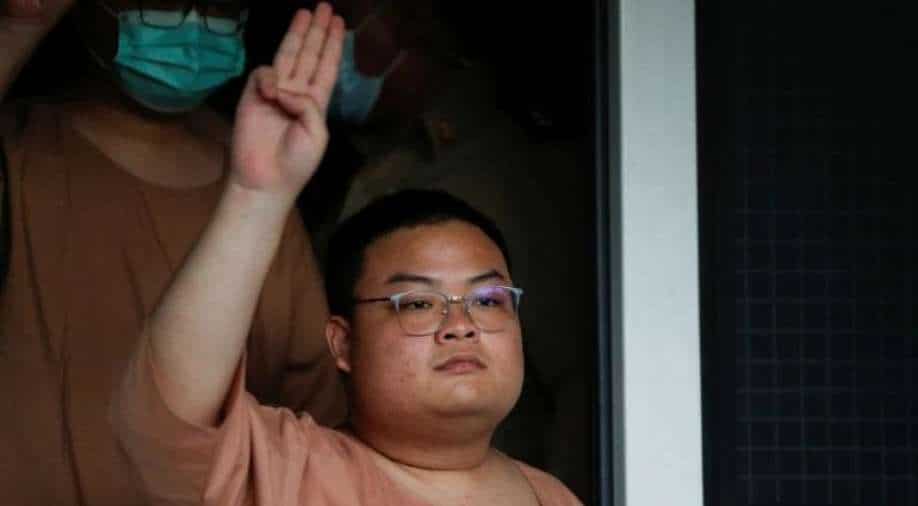 Parit Chiwarak, who goes by the nickname "Penguin", was held in pre-trial detention for nearly 100 days for multiple royal defamation charges.

He is one of several protest leaders hit with such charges after massive demonstrations calling for changes to the kingdom's powerful royal family.

Have a look | Paint, tomatoes and eggs — Thailand marches to demand release of Penguin

To protest his detention, Penguin had gone on a hunger strike for 57 days — losing 12 kilogrammes (26 pounds) — before he was transferred to a hospital in late April to monitor his deteriorating health.

A Thai criminal court granted the university student bail on Tuesday under strict conditions, including that he doesn't leave the country or engage in activities that "dishonour the monarchy".

But Penguin remained defiant on Wednesday in a message posted to social media platform Line.

"For me, the fight for monarchy reform will continue," he wrote, adding that the call does not dishonour the institution.

"The fighting for democracy will continue with strength. Our fight is based on truth and there is no power bigger than truth."

The 22-year-old had left prison the night before wearing a T-shirt emblazoned with the words "monarchy reform" and flashed a three-finger salute — a symbol of resistance — out the ambulance window.

Criticism of the monarchy remains taboo due to harsh lese majeste laws that carry penalties of up to 15 years in jail per charge.

Penguin faces 20 lese majeste charges for his prominent role in last year's demonstrations against the Thai government -- which at its peak drew tens of thousands to the streets.

She was outside the Khlong Prem prison Tuesday night, awaiting Parit's release alongside a large Bangkok media scrum.

On Wednesday, she announced on Facebook that she had tested positive for coronavirus.

"I just received the result of Covid test and found that I was infected," she wrote, apologising if she put people at risk and outlining a timeline of her activities.

Another high-profile protest leader, human rights lawyer Anon Numpa, who is facing 12 royal defamation charges, has been unable to apply for bail while he recovers from Covid-19 in hospital.

The Thai Department of Corrections on Wednesday confirmed 1,040 coronavirus cases at the Central Women Correctional Institution where Panusaya was in custody.

The department said there were also 1,795 infections at the Khlong Prem men's maximum-security prison in Bangkok.

The infected prisoners are being treated at on-site prison health clinics and at field and external hospitals.

"Every correctional institution has strict measures with a bubble and seal approach," the department said.