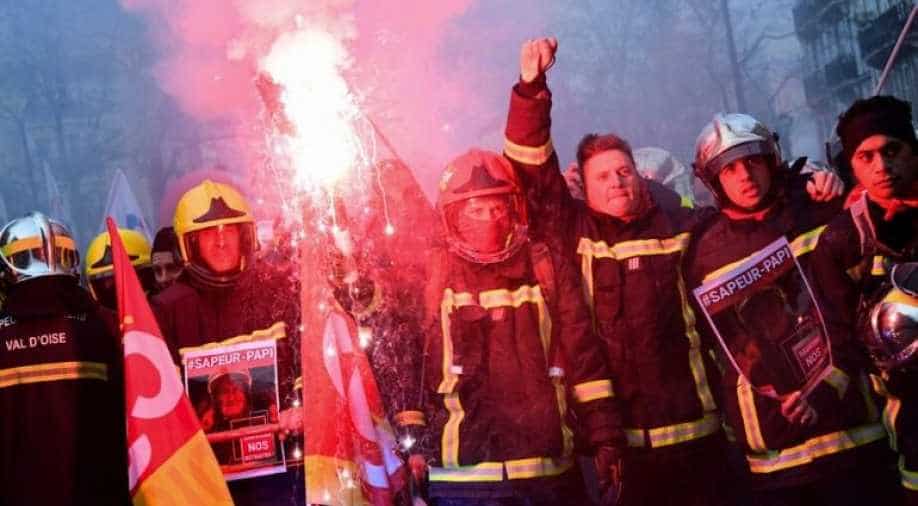 The strike - now longer than the notorious 22-day strike of winter 1995 - has now lasted 25 days and is on course to surpass the longest transport strike in France.

The French government and a key trade union on Sunday exchanged bitter accusations over who was to blame for France's over three-week transport strike against pension reforms, as the stalemate showed little sign of relenting.

Deputy Transport Minister Jean-Baptiste Djebbari accused the hardline CGT union of a "systematic opposition to any reform" while the union's chief Philippe Martinez charged the government with strewing "chaos" in the conflict.

The strike -- now longer than the notorious 22-day strike of winter 1995 -- has now lasted 25 days and is on course to surpass the longest transport strike in France which lasted for 28 days in 1986 and early 1987.

Aside from two driverless lines, the Paris metro was again almost completely shut down on Sunday while only a fraction of high-speed TGV trains were running.

The government and unions are only due to hold their next talks on January 7, two days ahead of a new day of mass demonstrations against the reform which is championed by President Emmanuel Macron.

In an interview with the Journal de Dimanche newspaper, Djebbari angrily accused the CGT of "attitudes of intimidation, harassment and even aggression" against railway workers who had opted not to down tools.

He accused the CGT of showing a "systematic opposition to any reform, of blocking and sometimes intimidation".

"The CGT wants to make its mark through media stunts. But the French are not going to be duped by the extreme-left politicisation of this movement," he added.

But in an interview with the same newspaper, Martinez accused the government of trying to ensure the conflict deteriorated further.

"Emmanuel Macron presents himself as a man of a new world but he is imitating Margaret Thatcher," he said, referring to the late British prime minister who sought to break the power of the unions in 1980s standoffs.

"There is real anger. Of course, not being paid for 24 days is tough. But the conflict is the result of two-and-a-half years of suffering," Martinez added.

He said he was awaiting concessions from Macron in a New Year's address Tuesday evening as well as recognition that "most people are not happy and that he (the president) was wrong".

The French president, elected in 2017 on pledges to reform France, has remained virtually silent on the standoff, save for a call for a Christmas truce that went unheeded and a vow not to take a presidential pension.

This will intensify attention on December 31 address, with all eyes on whether Macron offers steps to defuse the conflict or indicates he is ready for a long, grinding standoff.

The unions are demanding that the government drops a plan to merge 42 existing pension schemes into a single, points-based system.

The overhaul would see workers in certain sectors -- including the railways -- lose early retirement benefits. The government says the pension overhaul is needed to create a fairer system.

But workers object to the inclusion of a so-called pivot age of 64 until which people would have to work to earn a full pension -- two years beyond the official retirement age.