Days before US election 2020, shoes with Donald Trump's name appears in Palestine 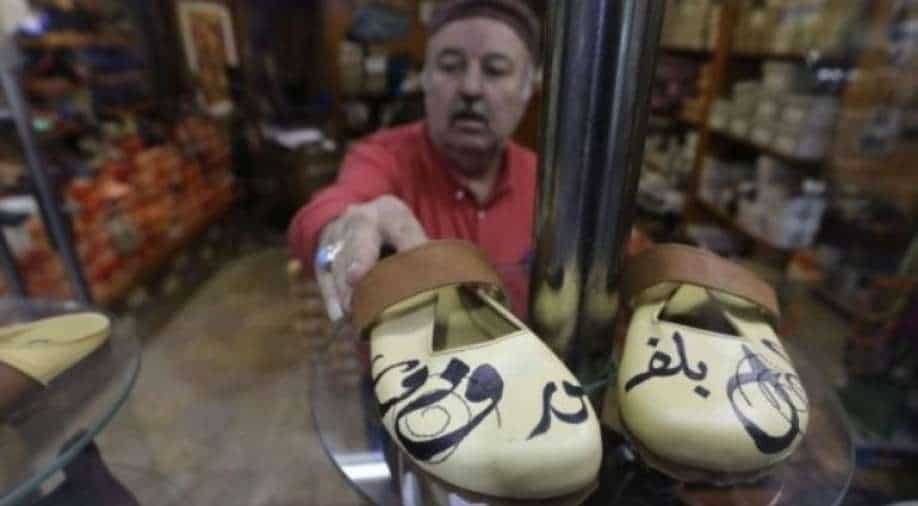 Shoes with Donald Trump's name appears in Palestine as an insult Photograph:( AFP )

The shoes with Trump's names are available in his shop for $50 (200 shekels) and are made from pure and genuine leather inside and outside, which he claims is 'more genuine than him (Trump).'

Support for the Democrat candidate and former Vice President Joe Biden is growing in every part of the world, and the Republican candidate and current President Donald Trump is taking a hit a few days before the upcoming US election.

In such a move to show support for Joe Biden, a Palestinian shoemaker is stamping Donald Trump's name in Arabic calligraphy on the footwear he produces and sells as an insult to the US President. The shoemaker is now quite popular among his Palestinian-American customers since he started making shoes with Trump's name on it.

He says the footwear a person wears is one of the most important things in one's apparel and attracts a lot of eyes and speaks volumed about the person. "When you observe body language, the lowest thing is the shoe. So the best thing to do is to put... Trump on the shoes of Palestinians," said the 57-year-old Imad Haj-Muhammad.

"Shoes touch the ground, dust and dirt. So if we write someone's name on them and that also gets dirty, then it shows... how you value that person," he continued.

In Arab culture, writing a person's name on a shoe is considered as a demeaning gesture

He says he put Trump's name on the shoes because he "assaulted our people" and "sold Jerusalem to Israel". The Palestinian man wants an apology from the President, his American customers or the win of the Democratic candidate Joe Biden to remove Trump's name from the shoes. "The apology is for my people because the insult was against my people... and my Islamic nation," he said.

Haj-Muhammad also has a sign outside his shop asking the American and French citizens to apologise for the statements and actions made by their leaders, Donald Trump and Emmanuel Macron, before entering the shop. While his anger towards Macron will not go away easily, he claims he is ready to remove the American poster if Joe Biden wins the election and reverses Trump's decisions.

"I will not remove the demand for an apology from the Americans unless America's decisions (to recognise Jerusalem as Israel's capital) is cancelled," he said. "If Biden rescinds the decision, I will remove the sign and I will be happy."

The shoes with Trump's names are available in his shop for $50 (200 shekels) and are made from pure and genuine leather inside and outside, which he claims is "more genuine than him (Trump)."