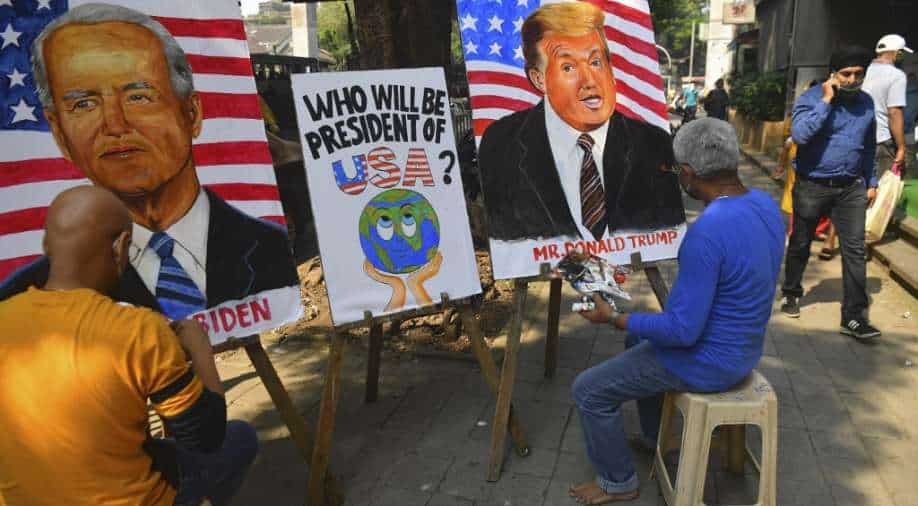 US President Donald Trump and Democratic challenger Joe Biden are making a late push for their respective campaigns, pressing closing arguments in a frantic sprint days ahead of the presidential election.

The campaign for the November 3 vote in the United States -- largely muted by the pandemic -- is drawing to a close. And quite understanding the gravity of the election, a record 90 million people have already cast their early votes.

US President Donald Trump and Democratic challenger Joe Biden are making a late push for their respective campaigns, pressing closing arguments in a frantic sprint days ahead of the presidential election.

Biden has taken the offensive, pushing Trump onto the back foot in unexpected battlegrounds like Texas, a large, traditionally conservative bastion now seen as a toss-up.

Trump and Biden whisked through crucial states in the industrial Midwest and coastal southeast on Saturday.

Trump did what he has been doing -- warned of "bedlam in our country" if no clear winner emerges quickly in Tuesday's election, saying, without evidence, that it could take weeks to sort out a result and that "very bad things" could happen in the interim.

Biden meantime told backers it was "time for Donald Trump to pack his bags and go home."

The election takes place in a deeply divided country, with feelings so raw that gun sales have surged in some areas. Businesses in some cities, including Washington, are protectively boarding windows, and police are preparing for the possibility of violence.

Trump Saturday focussed on the key battleground state of Pennsylvania, while Biden made his first joint appearance of the campaign with his former boss Barack Obama -- probably the most popular Democrat in the country -- in Flint, Michigan as they scramble to boost turnout in a state Trump carried by a razor-thin margin in 2016.

Trump is spending the closing days of his re-election campaign criticising public officials and medical professionals who are trying to combat the coronavirus pandemic even as it surges back across the United States.

At a small, in-person rally in Newtown, Pennsylvania, Trump mocked his opponent for his criticism of the administration's record of fighting COVID-19, which has killed more people in the United States than in any other country.

"I watched Joe Biden speak yesterday. All he talks about is COVID, COVID. He`s got nothing else to say. COVID, COVID," Trump told the crowd, some of whom did not wear masks.

He said the United States was "just weeks away" from mass distribution of a safe vaccine against COVID-19, which is pushing hospitals to capacity and killing up to 1,000 people in the United States each day. Trump gave no details to back up his remarks about an imminent vaccine.

In Butler, Pennsylvania, Trump arrived at the biggest rally of the day so far with well over 5,000 people crammed in -- few in masks but many wearing red Trump hats.

In remarks at an event in Bucks County, Trump lashed out at Biden, saying he would shut down the state's fossil-fuel industry.

Despite recent signs of recovery from the virus-induced economic pain, however, millions remain jobless.

In stark contrast, Biden and Obama appeared Saturday before a socially distanced drive-in rally in Flint, and made an unannounced stop in suburban Bloomfield Hills before heading to Detroit, where they were joined by superstar singer Stevie Wonder.

Obama pulled few punches in Flint and Detroit, saying 140,000 American lives would have been saved if the president had taken an approach to the pandemic similar to Canada's.

"This is not a contest of just calling each other names," Obama said.

"This isn't a sporting event. This is life or death."

Biden said "we're done with the chaos, the tweets, the anger, the failure, the refusal to take any responsibility."

Biden's campaign announced he will address the nation on election night from his home base of Wilmington, after a vote that will undoubtedly leave millions bitterly disappointed, no matter who wins.

Trump has repeatedly claimed without evidence that mail-in ballots are susceptible to fraud and has more recently argued that only the results available on election night should count. In a flurry of legal motions, his campaign has sought to restrict absentee balloting.

"I don’t care how hard Donald Trump tries. There’s nothing – let me say that again – there’s nothing that he can do to stop the people of this nation from voting in overwhelming numbers and taking back this democracy,” Biden said.

In his closing arguments, Biden has accused Trump of being a bully, criticised his lack of a strategy to control the pandemic, which has killed nearly 229,000 Americans; his efforts to repeal the Obamacare healthcare law; and his disregard for science on climate change.

He has offered his own made-in-America economic platform, a contrast with Trump's "America First" approach, saying he will get the wealthy to pay their fair share and make sure earnings are distributed more equitably.

Opinion polls show Trump trailing former Vice President Biden nationally, but with a closer contest in the most competitive states that will decide the election. Voters say the coronavirus is their top concern.

Meanwhile, Stanford University economists on Saturday released an estimate that Trump rallies held from June to September led to more than 30,000 additional COVID-19 infections and possibly as many as 700 deaths. The study was based on a statistical model and not actual investigations of coronavirus cases. The paper, which did not cite disease experts among its authors, has not been peer-reviewed.

Public health officials have repeatedly warned that Trump campaign events could hasten the spread of the virus, particularly those held in places where infection rates were already on the rise. Determining the actual impact of those rallies on infection rates has been difficult due to the lack of robust contact tracing in many US states.