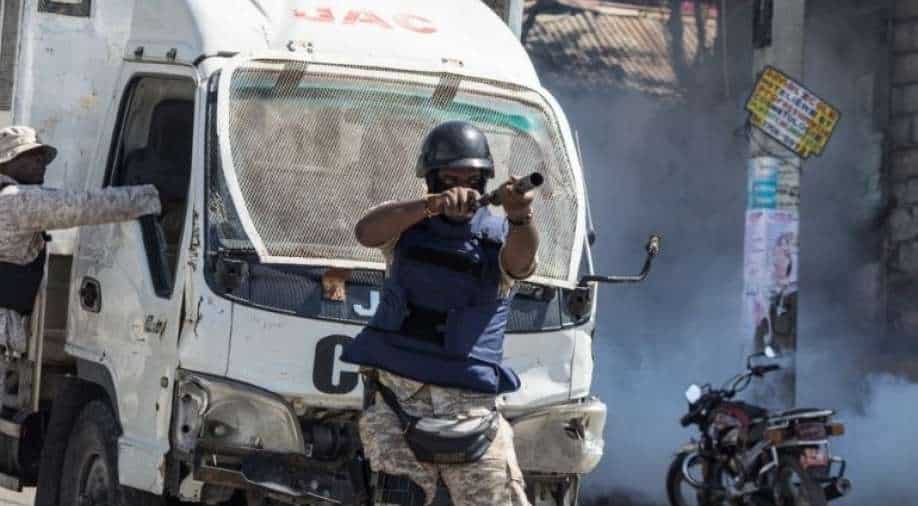 A police officer shoots tear gas toward a group of journalists gathered to cover a protest against the Haitian president, in Port-au-Prince on Wednesday. Photograph:( AFP )

The protesters accuse Moise of illegally extending his term in office. Moise says it lasts until February 2022 -- but the opposition argues it should have ended last weekend, in a standoff over disputed elections

In the latest clashes to mark the country's political crisis, Haitian police fired tear gas on hundreds of protesters, who were marching against President Jovenel Moise, in Port-au-Prince on Wednesday, and attacked journalists covering the demonstration.

The protesters accuse Moise of illegally extending his term in office. Moise says it lasts until February 2022 -- but the opposition argues it should have ended last weekend, in a standoff over disputed elections.

Police moved to violently clear the demonstration, and on several occasions were seen directly targeting clearly identified members of the press.

"Their job is to shoot the activists, throwing gas on all the press," said protester Senat Andre Dufot.

"We all noticed that they put a tear gas canister in the back of the pickup of the TV Pacific car," he said, referring to a Haitian media outlet vehicle, while clutching a copy of the country's constitution in his hand.

In a statement, the Association of Haitian Journalists then called on the Haitian National Police authorities to conduct an investigation to identify the perpetrators of these abuses so that they can be held accountable for their actions.

Officials loyal to Moise claimed on Sunday they had foiled an attempt to murder him and overthrow the government in a coup. Police arrested 23 people, including Haitian Supreme Court judge Yvickel Dieujuste Dabresil, accusing them of an 'attempted coup’.

And on Tuesday, Moise tried to force out three judges, including Dabresil, who were proposed as potential interim national leaders to replace him.

Dabresil was released on Wednesday from prison on the outskirts of the Haitian capital but remains under judicial supervision, according to his lawyers. However, human rights activist Marie-Yolene Gilles of the Je Klere Foundation later said the judge remained in prison.

"When there are opponents fighting, the best way to eliminate them was to accuse them of fomenting a coup," another protester, Ebens Cadet, said on Wednesday.

The decree appeared to be contrary to the constitution and Haitian law.

The United States had backed Moise's stance, and he appears to have retained control of the Caribbean island nation.

But in a statement on Twitter posted on Tuesday, the US embassy in Port-au-Prince said it was "deeply concerned about any actions that risk damaging Haiti's democratic institutions."