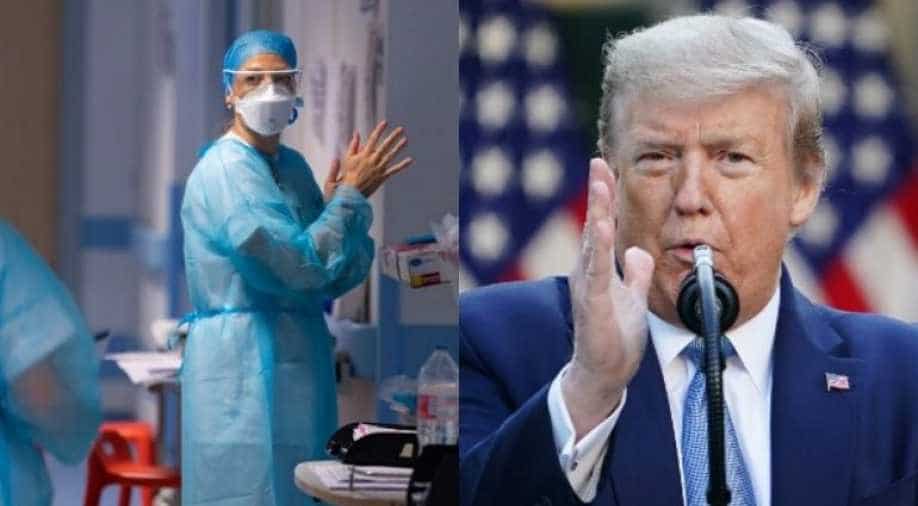 US President Donald Trump has also indicated that the US may be looking at "a lot more money" in damages from China than the USD 140 billion being sought by Germany from Beijing for the pandemic.

US President Donald Trump doubled down on China for failing to tame the coronavirus at its very origin, saying it has led to 184 countries "going through hell", as several American lawmakers demanded steps to reduce dependence on Beijing for manufacturing and minerals.

Trump has been publicly blaming China for the global spread of the "invisible enemy" and launched an investigation against it. He has also indicated that the US may be looking at "a lot more money" in damages from China than the USD 140 billion being sought by Germany from Beijing for the pandemic.

Leaders of the US, the UK and Germany believe that the deaths and the destruction of the global economy could have been avoided, had China shared the information about the virus in its early phases.

"It's in 184 countries, as you hear me say often. It's hard to believe. It's inconceivable," Trump told reporters at White House Tuesday.

The virus, which originated in China's Wuhan city in mid-November, has killed more than two lakh people and infected over three million globally. The largest number of them are in the US: nearly 59,000 deaths and over one million infections.

The massive outbreak in the US has put Trump under increasing pressure from American lawmakers to decrease US dependence on Beijing and they have also sought compensation from China.

Senator Ted Cruz and his colleagues have urged Defence Secretary Mark Esper and Interior Secretary David Bernhardt to support the development of a fully domestic supply chain of rare earth and other minerals that are critical for manufacturing defence technologies and supporting national security.

"It is clear that our dependence on China for vital rare earths threatens our US manufacturing and defence-industrial base. As the October 2018 Defence Industrial Base Report states: 'China represents a significant and growing risk to the supply of materials deemed strategic and critical to US national security.' [...] Ensuring a US supply of domestically sourced rare earths will reduce our vulnerability to supply disruptions that poses a grave risk to our military readiness," the Senators wrote.

The US is 100 per cent import-dependent for rare earths as well as 13 other metals and minerals on the US Government Critical Minerals List and more than 75 per cent import reliant for an additional 10 minerals.

Congressman Brian Mast on Tuesday introduced legislation to hold China accountable for its "coronavirus deception". The resolution would empower the US to withhold payments on debts owed to China equal to the costs incurred by the US in response to COVID-19.

"China's total lack of transparency and mishandling of the coronavirus outbreak has cost tens of thousands of lives, millions of jobs and left untold economic destruction. Congress must hold China accountable for their cover-up and force them to pay back the taxpayer dollars that have been spent as a result," Mast said.

Cruz, a member of the Senate Foreign Relations Committee, announced his intention to introduce legislation to cut off Hollywood studios from the assistance they receive from the Department of Defence if those studios censor their films for screening in China.

This legislation is part of Sen. Cruz's comprehensive push to combat China's growing influence over what Americans see and hear, which includes legislation targeting information warfare from the Chinese Communist Party across higher education, sports, films, radio broadcasts, and more.

Indian-American Congressman Ami Bera and Congressman Ted S. Yoho, both members of the House Foreign Affairs Committee, will lead a bipartisan virtual Special Order to highlight the importance of US global leadership during the COVID-19 pandemic.

"If we abdicate our place as a leader in global health, there is another country eager to take the reins. China has not been subtle in asserting itself on global health issues, and often not for the benefit of other nations. China's recent coronavirus debacle should be evidence enough that their communist regime cannot be trusted to lead with accountability, transparency, or pragmatism, traits that are essential when fighting widespread disease," Yoho said.

"As for how China would fare as a global health leader, look no further than the disastrous initial response by the WHO to coronavirus, one that was clearly influenced by Beijing. Information was slow-walked, warnings from nations like Taiwan were ignored at crucial turning points, and cooperation with outside health experts was spurned until it was too late. And it has resulted in the largest public health disaster the world has seen in over a century," he said.

In an interview to Fox News, Senator Marco Rubio alleged that if China had acted when those warnings were being made, instead of silencing the people that were talking about it, they could have limited the spread.

"So there was no doubt that that was a deliberate decision made on their part. The one way to hold them accountable is to do what we should be doing anyway. That is moving the means of production to become less and less dependent upon them. What you're going to see after this pandemic is that more and more countries are going to prioritize their healthcare manufacturing capabilities and other industries," he said.