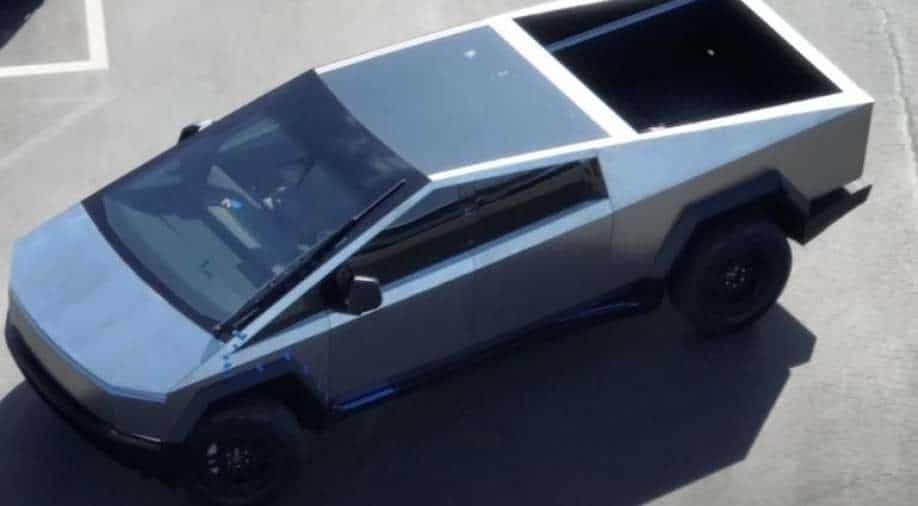 The truck, a stainless-steel-covered triangle, resembles the much-derided Pontiac Aztek SUV sold by General Motors in the early 2000s

The new design of Tesla's new Cybertruck has been captured by a drone. The electric-car maker's much-anticipated Cybertruck would come with a high-end four-motor variant.

Known for making eye-popping statements on social media, Musk said the truck's “wiper is what troubles [him] most” as they are “comically large.”

Calling the electric pick-up truck "insane technology bandwagon," Musk said the Cybertruck would have both front and rear-wheel steer that would "not just (turn) like a tank – it can drive diagonally like a crab."

The vehicle would compete with pickup trucks such as GMC's Hummer EV, Ford's F-150 Lightning, and Rivian's R1T.

Of those, R1T is driven by four individual motors powering all four wheels and GMC's Hummer can drive diagonally.

During its previous launch, the truck's supposedly unbreakable window glass splintered twice when hit with a large metal ball.

The failure overshadowed the truck’s slick unveiling, with some analysts panning its looks. The truck, a stainless-steel-covered triangle, resembles the much-derided Pontiac Aztek SUV sold by General Motors in the early 2000s.

With the truck, Tesla is gunning for buyers with fierce brand loyalty.

Tesla's pick-up truck, first announced in 2019, is made of stainless steel used in rockets and Musk has touted receiving several hundred thousand orders for the Cybertruck when preorders were opened.

Tesla’s pickup is more likely to appeal to weekend warriors who want an electric vehicle that can handle some outdoor adventure. And it could end up cutting into Tesla’s electric vehicle sedan sales instead of winning over traditional pickup truck drivers.

Musk said he would give updates on the product roadmap on the next earnings call. Cybertruck production is expected to begin next year and reach volume production in 2023.

Tesla has struggled to meet delivery targets for its sedans, and some fear the new vehicle will shift the company’s attention away from the goal of more consistently meeting its targets.

The company has so far avoided a major crisis from supply-chain woes and the global semiconductor shortage, issues that have hurt legacy automakers.

Musk is the world's richest person, worth $294 billion according to the Bloomberg Billionaires Index.