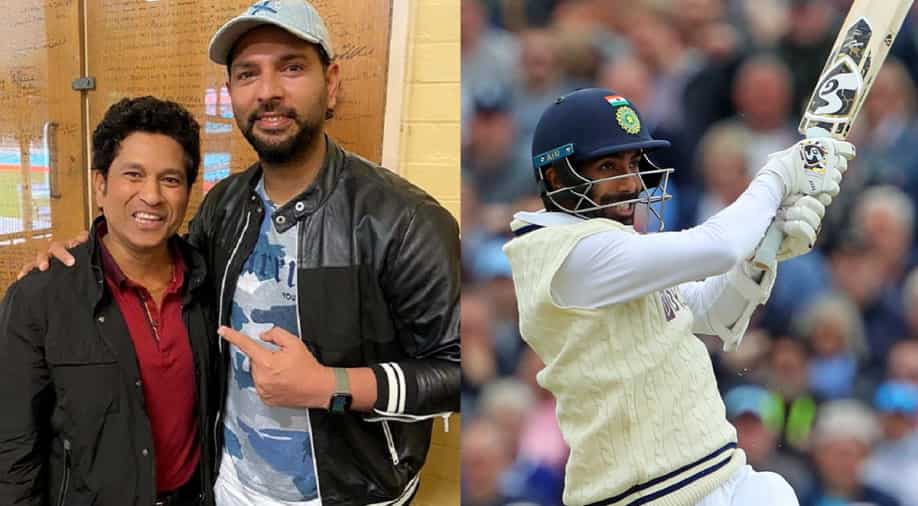 Yuvraj reacted to Sachin's tweet comparing him with Bumrah. | Photo - Instagram/AFP | Photograph:( Others )

Former India all-rounder Yuvraj Singh reacted to the legendary Sachin Tendulkar's tweet comparing him with Jasprit Bumrah after the Indian pacer got 35 runs off Stuart Broad's over during the ongoing Edgbaston Test between India and England.

Jasprit Bumrah took cricket fans on a trip down memory lane as he took England pacer Stuart Broad to the cleaners during the ongoing Edgbaston Test between India and England. Bumrah scored a whopping 29 runs off Broad's over to create the world record for most runs in a single over in Test cricket as went absolute bonkers with the willow on Day 2 of the rescheduled fifth Test.

Bumrah, who is known for his exploits with the ball, stunned the cricketing world with some sensational hitting against Broad in the ongoing Edgbaston Test. Bumrah slammed 4 fours, and 2 sixes and took a single to score 29 runs off the 84th over in India's first innings bowled by Broad. The England pacer also gave away 5 extra runs in the over to end conceding a whopping 35 runs from it.

With his 35-run over, Broad now holds the dubious record for bowling the most expensive over in Test history. Bumrah's bashing of the England fans reminded many fans of Yuvraj Singh's onslaught against the England pacer at the 2007 T20 World Cup where the former India all-rounder had slammed six sixes in an over against Broad to get 36 runs - the highest in a single over in T20Is.

Bumrah was compared to Yuvraj by many following his batting heroics against Broad on Day 2 with the legendary Sachin Tendulkar also drawing a comparison between the two. "Kya yeh Yuvi hai ya Bumrah!? 2007 ki yaad dilaa di (Is this Yuvi or Bumrah, reminded me of 2007)," Sachin wrote in a tweet after Bumrah smacked Broad for 29 runs in his over.

India were once reeling on 98/5 in their first innings in the Edgbaston Test against England before Rishabh Pant and Ravindra Jadeja struck centuries apiece to help the visitors recover from their poor start. The duo put on a 222-run stand for the sixth wicket while Bumrah propelled India to a strong total of 416 runs with his 16-ball 31 cameo towards the end.

Indian bowlers did well to bundle out England for 284 runs in their first innings as stand-in skipper Bumrah continued his fine form with the ball. He ran through the England top order before Mohammed Shami and Mohammed Siraj wreaked havoc on the middle and the lower-middle order. India amassed a healthy lead of 132 runs heading into their second innings and are in a strong position in the Test match.