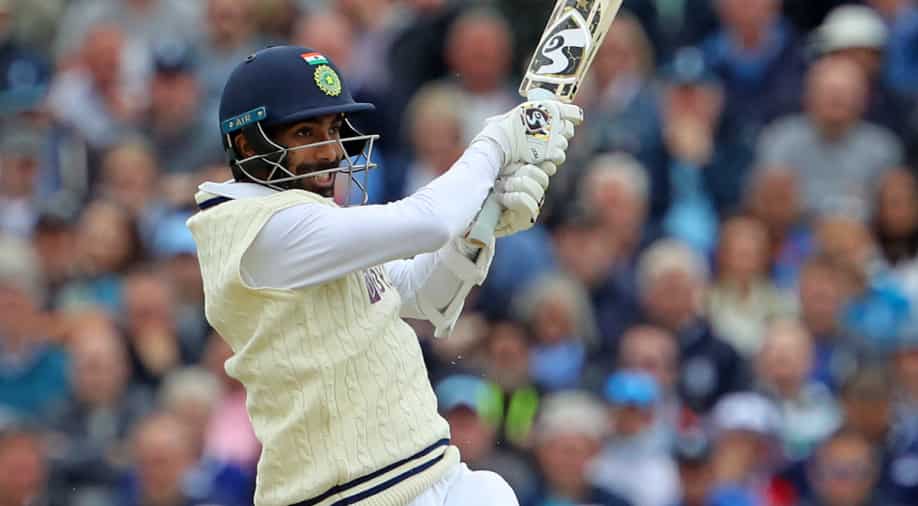 Jasprit Bumrah smashed Stuart Broad for most runs in a single over in Test cricket. Photograph:( AFP )

Jasprit Bumrah broke Brian Lara's record to slam the most runs by a batter in an over in Test cricket. Bumrah got 35 runs off Stuart Broad's over during the ongoing Edgbaston Test between India and England.

India's stand-in captain Jasprit Bumrah created a new world record in Test cricket as he went bonkers with the bat towards the end of India's first innings on Day 2 of the ongoing rescheduled fifth Test against England at Edgbaston in Birmingham. Bumrah launched an all-out attack against England pacer Stuart Broad and created the world record for most runs in a single over in Test cricket with 35 runs off it.

Bumrah, who is leading India in the absence of regular skipper Rohit Sharma in the ongoing Edgbaston Test, is the first fast bowler since the legendary Kapil Dev to captain the national team in the longest format. He came out to bat at number 10 during India's first innings and went on to play a sensational cameo.

Bumrah attacked Broad in the 84th over of India's innings as he started the over with a four before the England pacer bowled a short ball which flew over wicket-keeper Sam Billings' head and raced away to the boundary to hand India 5 extra runs. Bumrah slammed a six off the next one which was a no-ball and followed it up with three back-to-back fours off the next three balls. He then clubbed a six off the penultimate delivery from Broad before taking a single to end the over.

While Broad conceded 35 runs off the over to bowl the most expensive over in Test history, Bumrah scored 29 runs off it and broke Brian Lara's record for scoring most runs in a single over in Tests. Lara had smashed 28 runs in an over from Robin Peterson against South Africa in 2003.

Here is a look at batters with most runs in a single over in Tests:

BOOM BOOM BUMRAH IS ON FIRE WITH THE BAT

Bumrah remained unbeaten on 31 off just 16 balls as his sensational cameo helped India reach a strong total of 416 runs in their first innings against the host. The Indian skipper's 31-run-knock was laced with 4 fours and 2 sixes as he took Broad to the cleaners reminding him of the horrors of the 2007 T20 World Cup where Yuvraj Singh smashed 36 runs off an over from him to create the record for most runs in a single over in T20Is.