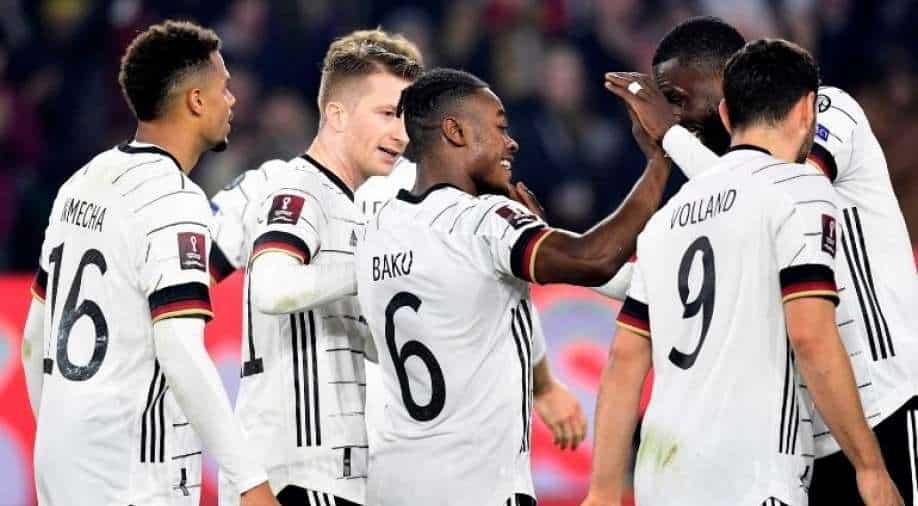 Germany will now play their final group game away to Armenia on Sunday.

A makeshift Germany team crushed 10-man Liechtenstein 9-0 in a World Cup qualifier on Thursday as Hansi Flick recorded the best ever start for a Germany coach with his sixth win in six games in charge.

With five players sidelined due to defender Niklas Suele`s COVID-19 infection, Flick had to make sweeping changes to his lineup.

But the already-qualified Germans eased past Liechtenstein, who were down to 10 men after 11 minutes, with two goals each from Thomas Mueller and Leroy Sane and top Group J with 24 points, nine ahead of second-placed North Macedonia.

"It was a great atmosphere, the fans were here and we showed we kept wanting another goal and then another one," Mueller said.

"Obviously, Liechtenstein getting a player sent off that early allowed us to have some more chances. But you have to see everything in perspective. It is not that we had to face an extremely difficult opponent in this group."

Germany play their final group game away to Armenia on Sunday.

The hosts, who also hit the woodwork twice, went ahead with an 11th-minute Ilkay Gundogan penalty after Jens Hofer was sent off for kicking Leon Goretzka with a high challenge in the face.

It got worse for the visitors who conceded three goals in three minutes, starting with Daniel Kaufmann stabbing the ball in for an own goal in the 20th.

Sane made it 3-0 by slotting home from a perfectly timed Goretzka pass and Marco Reus added another.

With Flick`s predecessor Joachim Loew, who received an official farewell before the game, watching from the stands, Germany struck again four minutes after the restart with Sane before late goals from Mueller and Ridle Baku.

Mueller bagged his second in the 86th before another own goal by Liechtenstein, this time from Max Goeppel, ended their miserable evening.